Netflix Canada subscribers, get ready for first-run access to The CW’s sci-fi series ‘The 100’, available one day after its U.S. air, made possible by an exclusive licensing deal with Warner Bros., reports Variety.

“We know that Canadians love thrilling sci-fi and adventure titles, so ‘The 100′ is a great addition to our Canadian service,” said Sean Carey, vice president of content acquisition for Netflix. “As a first-run exclusive series, this is the kind of exciting and high-quality, multi-genre content we will continue to bring to our members.”

Added Jeffrey Schlesinger, president of Warner Bros. Worldwide TV Distribution, “‘The 100? is a terrific series, and we believe Netflix will provide a great platform, allowing fans to start from the beginning at the time of their choosing.”

Ninety-seven years ago, nuclear Armageddon decimated planet Earth, destroying civilization. The only survivors were the 400 inhabitants of 12 international space stations that were in orbit at the time. Three generations have been born in space, the survivors now number 4,000, and resources are running out on their dying “Ark” – the 12 stations now linked together and repurposed to keep the survivors alive. Draconian measures including capital punishment and population control are the order of the day, as the leaders of the Ark take ruthless steps to ensure their future, including secretly exiling a group of 100 juvenile prisoners to the Earth’s surface to test whether it’s habitable. For the first time in nearly a century, humans have returned to planet Earth.

The series features Canadian native Marie Avgeropoulos as Octavia (pictured below) among others and is based on the book series by Kass Morgan. 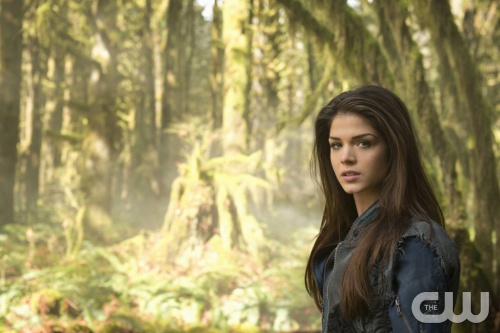 This exclusively deal means Warner Bros. has opted to go with Netflix Canada instead of a local Canadian TV broadcaster to stream the series, which will debut on March 20, within 24 hours of the U.S. premiere. Big news for TV cord cutters.

Click here to sign up for Netflix Canada—the first month is free—and you can watch it on your iOS device, Apple TV, Mac/PC and more.