Last month Netflix finally added Canada to its ISP speed index and the results showed Rogers in the last spot, which had customers accusing the carrier of throttling Netflix speeds, which it denied, stating over and over it had “doubled Netflix capacity” after those tests were performed.

Today marks the release of the Netflix ISP Speed Index for May, and this time the results show Rogers did have an increase in its ranking, moving from an average speed of 1.67Mbps in April to 2.52Mbps in May, a 51% increase:

Canada: No change to the top three, but TekSavvy, Allstream and Rogers all climbed two spots in the rankings with Rogers showing the biggest average speed improvement. 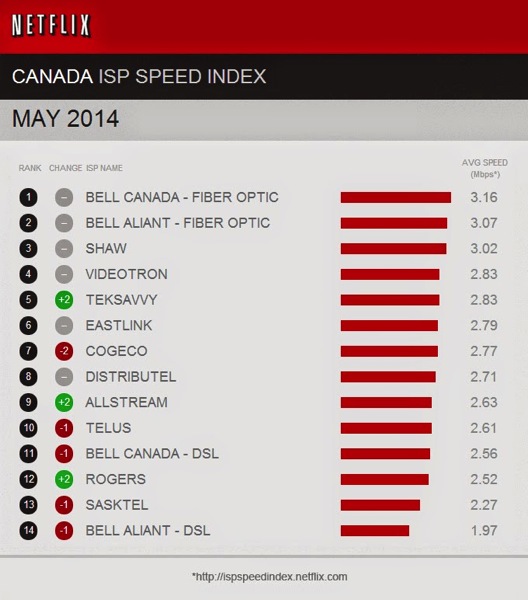 University of Ottawa law professor Michael Geist believed the Rogers response last month at the time “suggest[ed] that it knew that the service was being slowed by insufficient capacity.”

The chart above notes Rogers jumped up a couple spots while Telus went down one spot, along with Bell Canada’s DSL service.

Netflix says their ISP Speed Index “is based on data from the more than 48 million Netflix members worldwide who view over 1 billion hours of TV shows and movies streaming from Netflix each month.”

The speeds listed in the chart portray the average internet performance of all Netflix streams on an ISP’s network which the company says “are an indicator of the performance typically experienced across all users on an ISP network.”

Rogers, Telus and Bell have been part of the Netflix Open Connect network since early 2013. Rogers customers–have you noticed any performance differences in Netflix lately?