In an interview with The Canadian Press at Tuesday’s Toronto Film Critics Association Awards gala, Mayor John Tory suggested there’s a strong possibility that Netflix will soon set up shop in Toronto. “I have a very high level of confidence, without betraying confidences that aren’t yet concrete, that they’re going to,” said Tory. 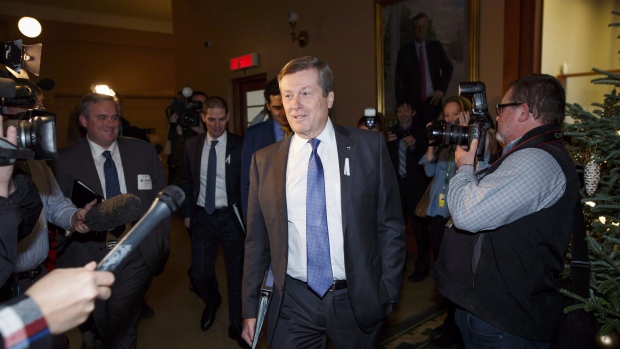 Netflix currently has production facilities in Los Angeles and has recently announced new production hubs for Madrid and Albuquerque. The streaming video company’s representatives met with the Mayor last year in LA when he was on his annual trip to the city to speak with film and TV studios about their working relationship with Toronto.

Tory said he looks forward to speaking with Netflix again this year and also meeting with the company representatives in February or March.

“They’ve been in active discussions with our industry, with me, about wanting to create one of their hubs here.”

“We’ve talked to them from here a number of times and they certainly know how much we would like to have them here,” Tory said.

“And they certainly have a strong interest in being here, so fingers crossed.”

Asked if he had any idea of when a production hub might be announced for the city, Tory said with a smile, “No. If I knew I wouldn’t tell you.”

In the past, Netflix has shot film and TV productions in Toronto, Vancouver, and other Canadian cities.