Netflix Just Increased Prices in Canada and the USA, Yet Again

Netflix raised its prices in Canada back in October 2020 and now it has just added another round of increases.

According to Reuters, Netflix confirmed on Friday it has increased its monthly pricing by $1 to $2 in the United States, from $13.99 USD to $15.49 USD.

The entry Basic plan remains at $9.99 CAD per month.

Netflix says these price increases are now live for new customers immediately. Existing customers will get an email 30 days before prices change for existing members.

“These prices apply to new members and will gradually take effect for all current members. Current members will receive an email notification 30 days before their price changes, unless they change their plan,” says Netflix on its website. 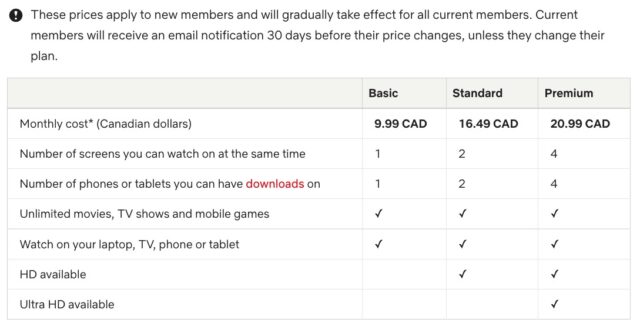 “We understand people have more entertainment choices than ever and we’re committed to delivering an even better experience for our members,” said a Netflix spokesperson, adding, “we’re updating our prices so that we can continue to offer a wide variety of quality entertainment options. As always we offer a range of plans so members can pick a price that works for their budget.”

As of September 2021, Netflix has 74 million customers in Canada and the U.S., the company’s largest market. The company spent $17 billion on new content in 2021, for its 213.6 million subscribers worldwide.

While Sony is yet to officially announce its selection of free games coming to PlayStation Plus subscribers in December, the lineup appears to have already leaked. According to the leakers at Deallabs, who have a 100% accurate record of sharing early PlayStation game leaks, Mass Effect Legendary Edition, Biomutant, and Divine Knockout are coming to PlayStation...
Usman Qureshi
27 mins ago

In celebration of Computer Science Education Week, Apple is introducing a new Today at Apple session, Coding Lab for Kids: Code Your First App, at Apple Store locations around the world beginning December 5. For those who aren’t familiar, the Today at Apple program offers free, daily in-store sessions that assist customers in unleashing their...
Usman Qureshi
42 mins ago