Netflix announced its new “Play Something” feature Wednesday, which allows users to shuffle through suggested movies and TV shows. 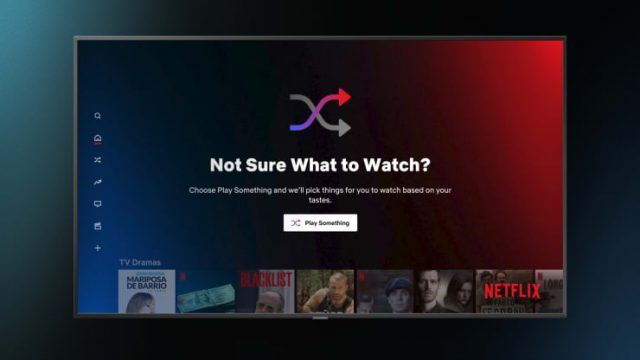 Vulture reports that the shuffle-play feature is designed to help users instantly find a new show or movie to dig into — instead of manually scrolling through Netflix’s menus. It’s something Netflix has been testing in various forms for two years.

“When finding your next story, let the story find you,” Cameron Johnson, Netflix’s director of product innovation, said in a statement. “Whether you’re in the mood for a new or familiar favorite, just ‘Play Something’ and let Netflix handle the rest.”

Netflix began testing the “Play Something” button last summer. These trials included both A/B tests with millions of consumers around the globe as well as more traditional focus groups, according to Johnson.

The result is a button that is featured prominently in three different places: the profile splash page, the sidebar menu, and on the home screen itself, where it is strategically placed in the 10th row of content, as a kind of hint for people who just keep scrolling down.

“That is an indication that you are struggling to choose,” Johnson said.

In early tests, Netflix was using the button to launch the last show someone had been binging on. Ultimately, Johnson’s team decided to focus on new content instead.

“It will always play a title that you’ve never watched before as the first title,” he said. Aside from skipping known shows for the first result, Netflix’s new button relies on the same algorithms that are also being used to curate a subscriber’s home page.

“Play Something” is available on Netflix to subscribers worldwide, and the company will soon begin launching the function on Android devices.