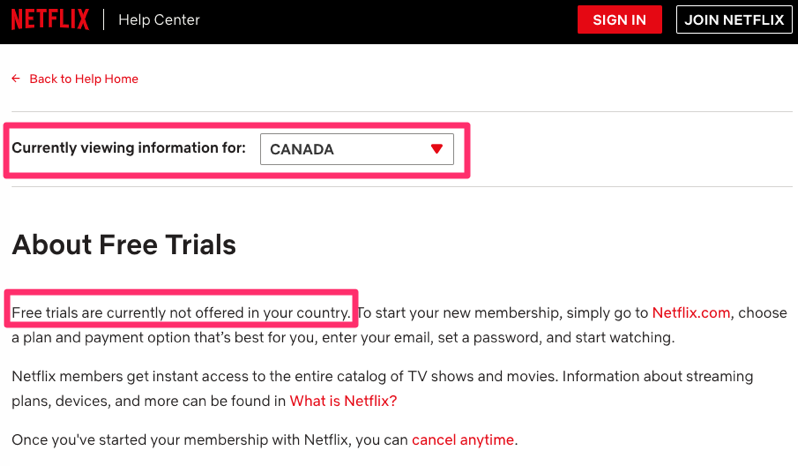 For new Netflix subscribers in Canada, you may have noticed something missing after signing up recently—-that’s right, your free month trial.

According to a customer by the name of ‘FavaBean’ venting on Twitter, she asked “Why did you quietly remove the free trial feature???? Nothing on the news even!! I made an account and sadly got charged for something I didn’t know I was paying for.”

@Netflix_CA Hi Netflix Canada. Why did you quietly remove the free trial feature???? Nothing on the news even!!I made an account and sadly got charged for something I didn't know I was paying for. Thank you.

The Netflix Help Center for Canada currently reads, “free trials are currently not offered in your country.” Free trials still currently exist for customers in the United States.

When asked about the change, a Netflix spokesperson told iPhone in Canada the following statement:

“We are testing the availability and duration of a free trial to better understand how consumers value Netflix. These tests typically vary in length of time and by region, and may not become permanent.”

So according to Netflix, the removal of the free one month trial is part of “testing” and “may not become permanent.”

Who knows when the free trial will return, but when rival services such as Bell Media’s Crave still offering a free month trial, you’d think Netflix would match that little bonus as well.

Netflix currently starts at $9.99 per month in Canada. The service recently confirmed it won’t be part of Apple’s upcoming video subscription plans.

Have you been affected the loss of Netflix Canada’s free month trial?