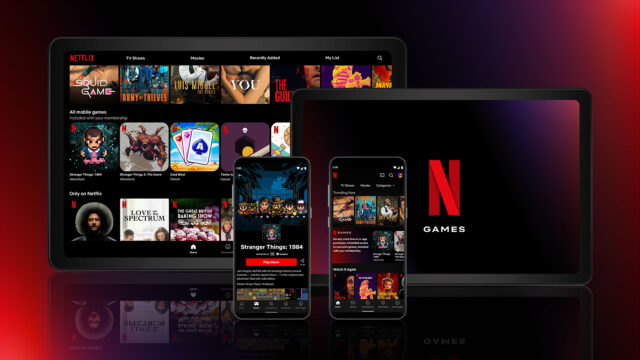 Netflix has been making investments in the gaming space, growing its offering to the subscriber base. However, according to data from app tracker Apptopia, Netflix Games is receiving fairly low engagement with an estimated 1.7 million daily active players.

As reported by CNBC, Apptopia finds that roughly one percent of Netflix subscribers engage in its video games on Android and iOS devices. Currently, Netflix Games support 24 titles ranging from those tied to its IP and other non-inspired titles. All games are available to Netflix subscribers, similar to Apple Arcade. According to Apptopia, the Netflix Games titles available have been downloaded a total of 23.3 million times.

As Netflix has a subscriber base of around 221 million, the engagement and adoption of its video game catalogue are meek. Currently, some of the heavy hitters are Stranger Things: 1984 and Stranger Things 3: The Game. However, both were independently developed and released prior to Netflix Games being a perk for subscribing. The catalogue is mainly filled with arcade games like Shooting Hoops, Card Blast, Bowling Ballers, etc.

However, Netflix appears to be determined to fully flesh out its corner of the gaming space. Netflix has acquired Texas-based indie studio Boss Fight Entertainment. It also purchased Next Games for around $94 million CAD. Plus, Oxenfree developers Night School Studio have been acquired as well. However, these investments still need to pay off in significant ways and take time to do so.

In the meantime, Netflix is still determined to bring more games to the catalogue. It’s said that by the end of 2022, Netflix Games will support 50 games. “We’re going to be experimental and try a bunch of things, but I would say the eyes that we have on the long-term prize really center more around our ability to create properties that are connected to the universes, the characters, the stories that we’re building,” Netflix COO Greg Peters said in 2021.

News of this comes off the heels that Netflix lost 970,000 subscribers in Q2 2022. Via its latest earnings report, Netflix is continuing to combat subscribers leaving the service whether due to rising subscription costs or the content offering. While subscribers dipped a little, Netflix’s revenue grew to $7.9 billion USD (roughly $10.1 billion CAD).