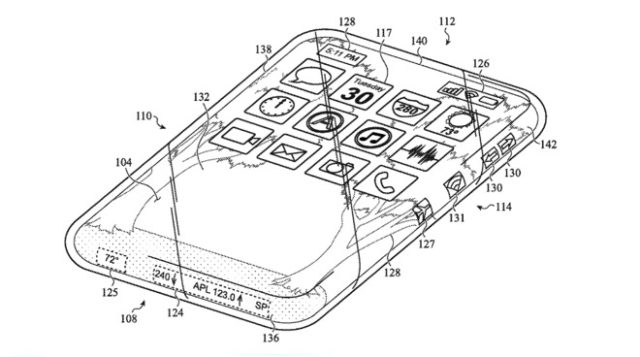 A new patent filed by Apple has been uncovered. The patent in question shows off an all-glass iPhone with a wraparound touchscreen, displaying icons and images across the entire face of the device.

Reported by AppleInsider, Apple’s patent was filed as “Electronic Device with Glass Enclosure” under US Patent No 20200057525. The patent images themselves show what appears to be a standard iPhone body with a screen wrapping around each edge of the device.

On the face of the phone, your standard first-party app icons are shown with an image in the background. The notable difference is that the tactile buttons for controlling the volume have been replaced by what looks to be touch icons. There also appears to be a quick navigation touch icon for Airplane Mode and Wifi.

The background display appears to wrap around and contour with the screen. According to the patent, the “glass backs and glass sides may be transparent, allowing the electronic device to include additional displays that are viewable through the sides and/or the back.”

It also appears that the patent will include pressure commands through force-sensing systems. In the research notes, the patent goes on to say: “Moreover, the side- and back-viewable displays may be made touch and/or force sensitive using touch- and/or force-sensing systems, effectively turning the side and back surfaces into additional input devices or surfaces with which a user may interact to control the electronic device.”

This could lead to having the ability to navigate Control Center icons by swiping through the edges on the device. You may also be able to control the iPhone by utilizing force-sensing to complete certain actions such as silencing the phone or powering it down.