According to new aerial shots captured by an amateur photographer using a DJI Phantom 2 Vision+ drone, just like the GoPro Records drone video released last week, massive initial earthwork and the beginning concrete foundations of the circular ‘Spaceship’ Campus 2 structure are making up the center of the construction site (via AppleInsider). 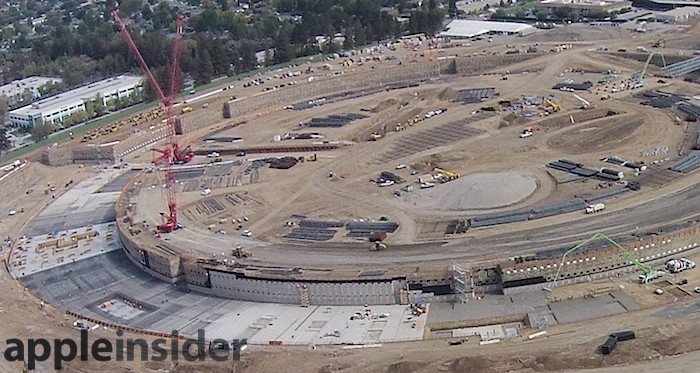 The video also reveals that the northwest corner of the construction site has been devoted to earthwork, following the removal of acres of parking lots that formerly covered most of the site. The source points out that once the construction work is finished, these piles of sand, cement and gravel will be replaced with fruiting orchards surround by other trees.

“A subterranean ring foundation and retaining walls are also now taking shape. The initial walls appear to be rising about four stories above the basement, dwarfing the large concrete mixers and pumper trucks currently working to rapidly lay slabs that will make up the floor of the giant ring-shaped building. A detail of the image illustrates the scale of the earthwork being performed, which dwarfs the existing building on the remaining stump of Pruneridge Ave at the central eastern edge of the site.”

Check out the embedded videos below for more.