Now, MacRumors has shared screenshots offering the clearest evidence yet of the existence of ‘Apple Tags’. These screenshots—seen below—are from the hidden “Items” tab within Apple’s Find My app within iOS 13, an internal build dating back to June of this year. 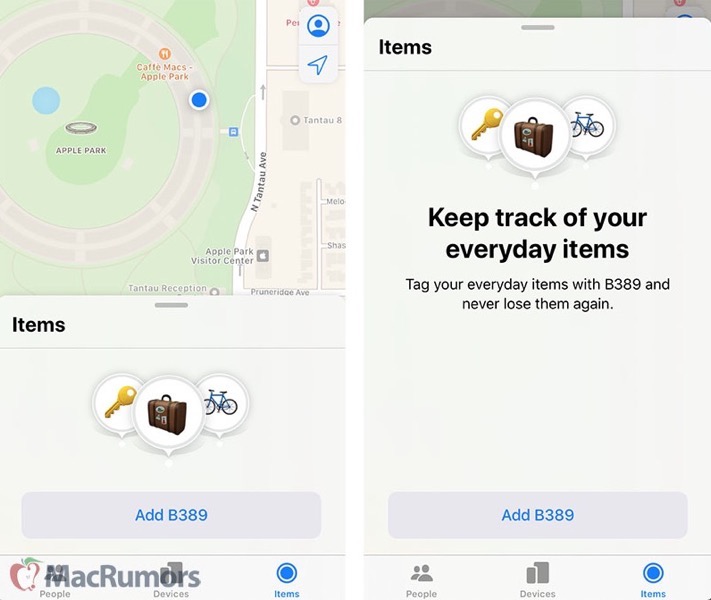 MacRumors’ Joe Rossignol explains, “Similar to the existing “People” and “Devices” tabs in the Find My app, the “Items” tab will display a map at the top and a list of items associated with a user’s Apple ID account at the bottom. The existing “Me” tab in the Find My app will be relocated to an avatar hovering over the map in all tabs.”

The screenshots show a tracker codenamed “B389”, while the “Items” tab explains, “Keep track of your everyday items. Tag your everyday items with B389 and never lose them again.” The tab shows icons for keys, luggage and a bicycle, suggesting these are potential use cases for ‘Apple tags’.

These images above affirm Apple’s so-called Tile-tracker competitor does exist and was most likely pulled before the September special event. These screenshots are not seen in the recent iOS 13 beta builds released earlier today.

Despite rumours by Apple crystal ball holder, analyst Ming-Chi Kuo, who predicted a Tile-like tracker would be announced at the company’s September event, it never happened. Apple’s latest iPhone 11, iPhone 11 Pro and iPhone 11 Pro Max include a new U1 chip, which supports ultra wideband technology, which can detect location accuracy indoors far better than Bluetooth or Wi-Fi.

As far back as April, it was discovered Apple was working on a tracking product similar to Tile. This most recent leak pieces together previously leaked screenshots in August of B389, but this time adds more context in how the system would work in the Find My app.

Apple has shared a new Shot on iPhone 14 Pro short film on its YouTube channel today, called ‘Fursat’ by director Vishal Bhardwaj. The 30-minute short film is described as “a magical story about a man so obsessed with controlling the future that he risks losing what he holds most precious in the present. Bhardwaj […]
Gary Ng
2 seconds ago

Just two months after its launch, OpenAI's ChatGPT has reached 100 million monthly active users making it the fastest-growing consumer app ever, Reuters is reporting. In comparison, it took TikTok about nine months after its global launch to reach 100 million users and Instagram 2 and a half years. According to a UBS study citing data...
Usman Qureshi
41 mins ago