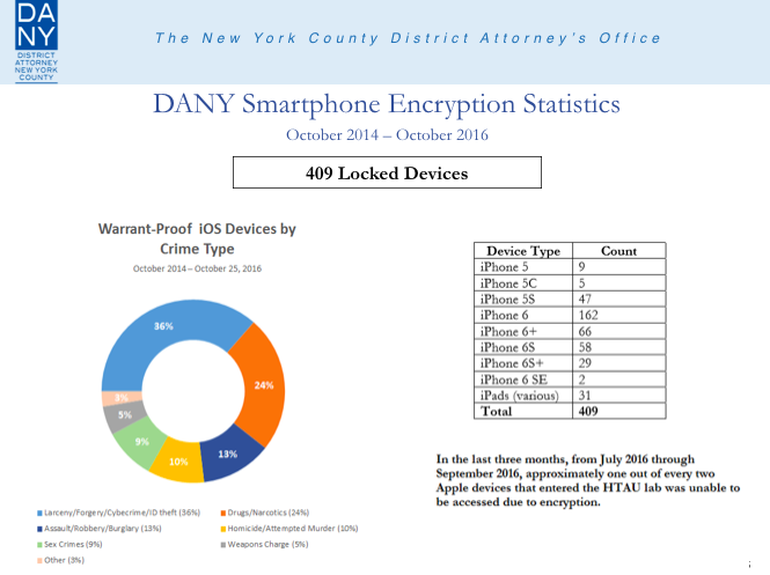 According to a new report released yesterday at the launch of the Manhattan district attorney’s brand-new “cyberlab,” Cyrus Vance unveiled the fact that there are currently over 400 locked iPhones sitting in evidence in New York County. Vance believes that these phones could be used to investigate serious crimes if Apple was willing to help.
“In the Manhattan District Attorney’s Cyber Lab alone, more than 420 lawfully-seized Apple devices remain inaccessible to investigators as a result of Apple’s implementation of default device encryption in October 2014,” reads the report. “As noted in Version 2.0 of the Report, 10% of the “warrant-proof” devices in the District Attorney’s Cyber Lab pertain to homicide or attempted murder cases, and 9% of the devices relate to sex crimes.”

Vance argues that law-enforcement agencies do not want a backdoor to Apple and Google products, but rather a return to pre-September 2014, when Apple’s encryption didn’t prevent them from carrying out a search warrant on an iPhone.

Apple released iOS 8 in September 2014 with a new encryption method that prevented access to stored data unless the password was known. It triggered a drawn-out skirmish between Apple and US law enforcement that came to a head in February over the FBI’s fight to have Apple unlock the San Bernardino shooter’s iPhone 5c.

The report concluded saying, “Doing nothing about this problem will perpetuate an untenable arms race between private industry and law enforcement, and that federal legislation is our only chance to lay these arms aside”.