There are more than 28 million wireless subscribers in Canada and smartphone adoption has surpassed the 65% mark, but 911 centres are still tethered to last-century voice-centric technology. Advocates for Next Generation 911 want to bring a necessary upgrade that will allow smartphone users to not only initiate voice calls but also send texts, photos, and videos in case of emergency situations (via CBC). 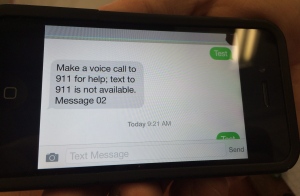 “The reason that that is important is because as much information as we can gain about the emergency situation, the better the ability to manage the resources that would attend to that emergency,” said Brian Fontes.

In a world described by NG911 advocates, emergency call centres would use what’s known as emergency service Internet, which would allow them to receive voice, video, and data, Brian Fontes, CEO of the National Emergency Number Association in Alexandria, told CBC.

There are a couple of issues that need to be solved, though, before NG911 can be implemented in Canada. For example, public safety answering points — PSAPs, where 911 calls come in — need to be able to transfer data from the scene, said Eric Torunski, executive director of the Canadian Interoperability Technology Interest Group.

Since we can’t simply turn off the 911 system across North America and the Caribbean, we have to have two parallel networks running at one time, meaning the legacy 911 systems will have to run while the IP-based, emergency-calling NG911 systems are built and put in place,” said Industry Council for Emergency Response Technologies executive director George Rice.

Another issue is data retention and security, as pointed out by APCO Canada president Gavin Hayes:

“If you get a homicide scene, you could have potentially hundreds of thousands of videos or pictures that come in, and whose responsibility is it to try to find the right piece of information. There’s a number of things that we look at.”

These are just a few of the issues with NG911, but many others remain unknown, like the ones that may be faced by the communications-centre staff.