I’ve said it before and I’ll say it again: you gotta love the weeks leading up to any Apple event. In this case, the 2009 World Wide Developer Conference is coming up and that has started up the rumor mill.

Yesterday, some very interesting next generation iPhone details were “leaked” by AppleiPhoneApps.com, which has spread like wildfire across the interwebs. They claim that a very close source to Apple has provided them with some insider knowledge of upcoming features.

* 32GB and 16GB to replace current capacities (agree)
* $199 and $299 price-points to be maintained (agree)
* 3.2 Megapixel camera (agree)
* Video recording & editing capabilities (agree)
* Ability to send a picture & video via MMS (agree)
* Discontinuation of the metal band surrounding the edge of the device (it would be safe to say a 3rd gen iPhone would get a new makeover)
* OLED screen (possible)
* 1.5X The battery life (agree)
* Double the RAM and processing power (agree)
* Built-in FM transmitter (maybe)
* Apple logo on the back to light up (maybe)
* Rubber-tread backing (nope)
* Sleeker design (agree)
* Built-in compass (maybe)
* Revolutionary combination of the camera, GPS, compass, and Google maps to identify photo and inform about photo locations. (maybe)
* Turn by turn directions (maybe)
* July 17th, 2009 release date (maybe, but I’d say a late announcement at the end of June by Jobs) 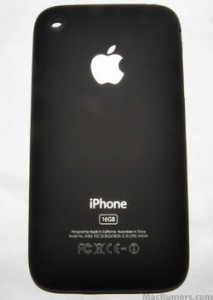 What to Make of All these Rumors?

Like I’ve always said, we’ll never know what’s coming until the next iPhone is launched. It is interesting though to hear juicy rumors, but like always we’ll take them with a grain of salt.

The next iPhone should have an OLED screen as that would definitely conserve battery power, versus the current LCD screen. I would also assume that a bump in processor/RAM, camera, and form factor as the most wanted upgrades.

The FM transmitter is not too hot of an idea, Apple is known to keep it simple and not try to overwhelm its devices with every single feature. Also, the rubber backing is not very Apple-like and I just can’t see that happening.

Etched in my mind is Steve Jobs making his triumphant return to announce yet another game-changing iPhone. Phil Schiller, in my mind is not ready yet to take over the role of Jobs. He definitely lacks the charisma and excitement that only Steve can bring. Phil’s turn will come, but I don’t think it will be this year.

What features from the list above do you think will/will not come true? Why?