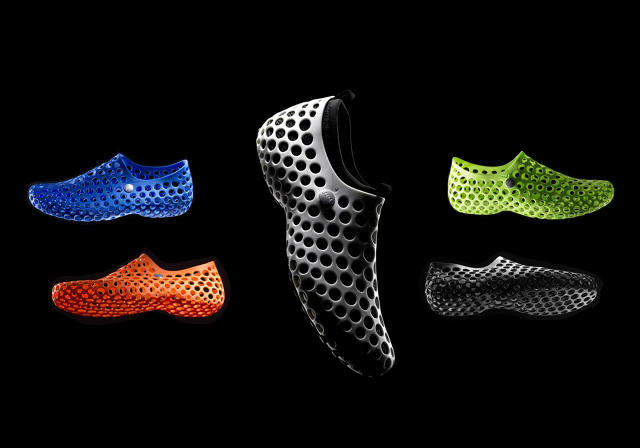 Nike has today announced the return of Marc Newson-designed space sneaker “Zvezdochka”, which was first developed at the personal request of Nike CEO Matt Parker over a decade ago. Cratered with holes like the lunar surface, the shoes look quite similar to Apple’s iPhone 5c case, which makes one wonder if Newson quietly designed the iPhone 5c case for Apple, well before it was announced that he’d be joining Apple’s design team (via FastCompany).

“To my mind, the shoes look nearly identical to Apple’s iPhone 5c case. In an interview with Dezeen, Newson says that this “particular shoe has spawned a lot of other interesting concepts.” Maybe the iPhone 5c case was one of them?”

The sneakers themselves are composed of over four intelocking layers: a breathable cage, a flexible inner sleeve, an interior sock liner, and a perforated outsole. The five original colorways were limited to 140 pairs when they were released back in 2004, and cost $300.

The Nike Zvezdochka will be available for purchase online starting December 29 for an undisclosed price.