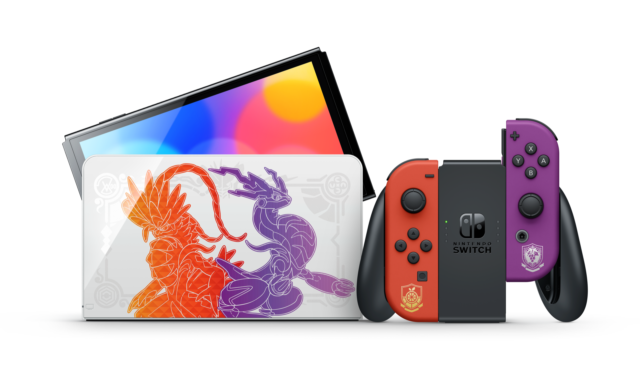 Revealed by Nintendo, Switch OLED Model Pokemon Scarlet & Violet Edition depicts art and designs from the upcoming Pokémon Scarlet and Pokémon Violet. For instance, the game’s legendary Pokémon Koraidon and Miraidon are displayed on the front side of the white system’s glossy dock. Additionally, a graphic inspired by the Poké Ball is featured on the back. The designs largely utilize a scarlet and violet colour pallet, drawing back to the games. That’s not all, the rear side of the Nintendo Switch handheld sports unique illustrations, featuring the game’s three starter Pokémon. Amongst the graphics and designs, Sprigatito, Fuecoco and Quaxly can be found. Once again, the designs utilize the same scarlet and violet colours. Finally, the Joy-Con controllers also match the main colours of Pokémon Scarlet and Pokémon Violet. Plus, each Joy-Con features the school emblems of the Naranja Academy and Uva Academy that appear in the respective games.

The hardware itself is the same as the standard Nintendo Switch OLED Model. Players gain access to a larger 7-inch OLED screen, compared to the standard Switch’s 6.2-inch display. OLED Model also includes a wide adjustable stand, a dock with a wired LAN port (LAN cable sold separately), and 64 GB of internal storage.

Pokémon Scarlet and Pokémon Violet mark a new generation for the series. The game offers a more open-world take on the traditional gameplay loop, enabling players to freely explore the Paldea region while meeting and catching new Pokémon. Both games are available on November 18th.

In Canada, the Switch OLED Model Pokemon Scarlet & Violet Edition will be available for $469.99. More information can be found on Nintendo’s website.

Any shred of mystery Google was saving for its Pixel 7 series launch event on Thursday, October 6, likely dissipated when a detailed and legit-looking spec sheet for the two phones leaked online over the weekend (via 9to5Google). Apparently, a mobile carrier in Taiwan prematurely shared the spec sheet for Google's Pixel 7 and Pixel...
Nehal Malik
6 mins ago