Nintendo just launched the highly anticipated and long-awaited upgrade to its Switch. 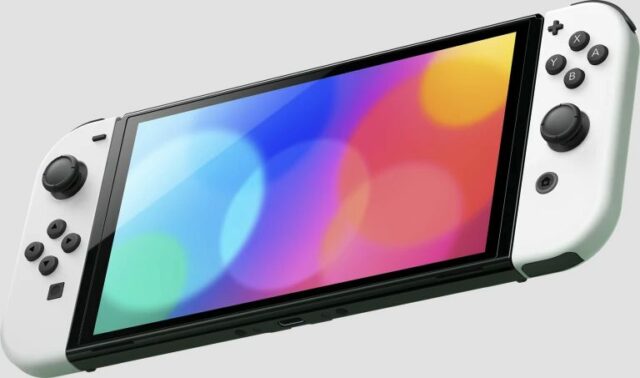 The new Nintendo Switch OLED model features exactly what its name suggests: an OLED display that’s bigger and brighter than previous models. And it releases today.

“Today is an exciting day for Nintendo fans, with two major new products launching in stores,” said Nick Chavez, Nintendo of America’s Senior Vice President of Sales, Marketing and Communications. “Nintendo Switch – OLED Model and Metroid Dread are both evolutions, one of best-selling hardware and the other of a well-known, loved franchise.”

The new model sports an impressive 7-inch screen — larger than the 6.2-inch screen on the standard model and the 5.5-inch one on the Switch Lite. According to Nintendo, the device has improved sound, twice the storage of the regular Switch at 64 GB and a wide adjustable stand featuring a wired LAN port. It’s available in two colourways: White Joy-Con controllers with a White dock and the Red and Blue combination of the previous Switch.

OLED displays have improved pops of color and vibrancy compared to standard LCD screens since each pixel generates its own light. This means pixels in dark areas can turn themselves off entirely for perfect, inky blacks.

However, the new Switch has the same 720p resolution as the regular model, so you won’t notice much difference in that department. The battery life (up to 9 hours) and internals, including CPU and RAM, are also identical to the regular Switch, so this is not the long-rumouured “Switch Pro” many were hoping for.

Just like previous versions, the OLED model is a hybrid console, meaning it can be played on the TV using the dock, on a tabletop using the stand, and in handheld mode with the controllers attached to the sides.

Nintendo Switch – OLED Model is now available in stores at a suggested retail price of $449.99 CAD. Learn more over at Nintendo’s website.