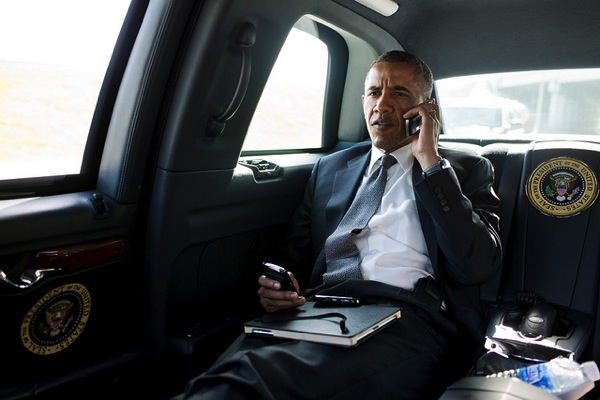 Image via The White House/Flickr

President Barack Obama revealed on Wednesday he’s not allowed to use an iPhone for “security reasons”, but uses an iPad, reports Reuters:

At a meeting wit youth on Wednesday to promote his landmark healthcare law, Obama said he is not allowed to have Apple’s smart phone, the iPhone, for “security reasons,” though he still uses Apple’s tablet computer, the iPad.

According to AFP, Obama told a group of youth at the White House “I’m not allowed for security reasons to have an iPhone,” but did say his daughters Sasha and Malia spend copious amounts of time on their iPhones.

The President uses an older BlackBerry which he fought hard to keep when he was inaugurated in 2009. He uses it to communicate with those outside the White House and revealed only ten people know his personal email address.

Yesterday it was reported Canada’s Information Commissioner, Suzanne Legault, suggested in a lengthy report federal government officials should stop using BlackBerry’s proprietary BBM service, due to the fact its encryption prevents messages from being archived for transparency and accountability.

BlackBerry, it looks like you still have one loyal fan remaining in President Obama (that is until he tries BB10).