Apple University Should Have a Course Dedicated to This One Email

An Apple email released to the public as part of the documents brought forward during the company’s lawsuit with Epic Games, seems to explain a lot about how the Cupertino giant has remained such a vital force in the industry for over a decade (via TechCrunch). 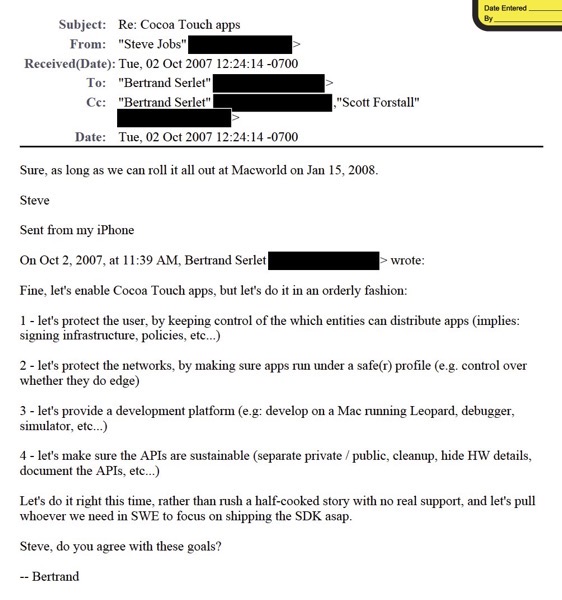 The email was sent by Apple’s SVP of Software Engineering, Bertrand Serlet, in October 2007, just three months after the original iPhone’s launch, outlining every core feature of Apple’s App Store.

Shortly after the email, Steve Jobs replied to Serlet and iPhone lead Scott Forstall from his iPhone, “Sure, as long as we can roll it all out at Macworld on Jan 15, 2008.”

It’s seven sentences that outline the key tenets of the App Store. User protection, network protection, an owned developer platform and a sustainable API approach. There is a direct ask for resources — whoever we need in software engineering — to get it shipped ASAP.

Serlet’s email is well written and has the exact right scope, yes. But the response is just as important. A demand of what is likely too short a timeline matching the urgency of the request for all teams to work together on this project. This is not a side alley, it’s the foundation of a main thoroughfare. It must get built before anything goes on top.

The same App Store has now turned into a business that brought in an estimated $64 billion for the company last year. You can read the author’s entire take on the email at the source page, it’s a good read.