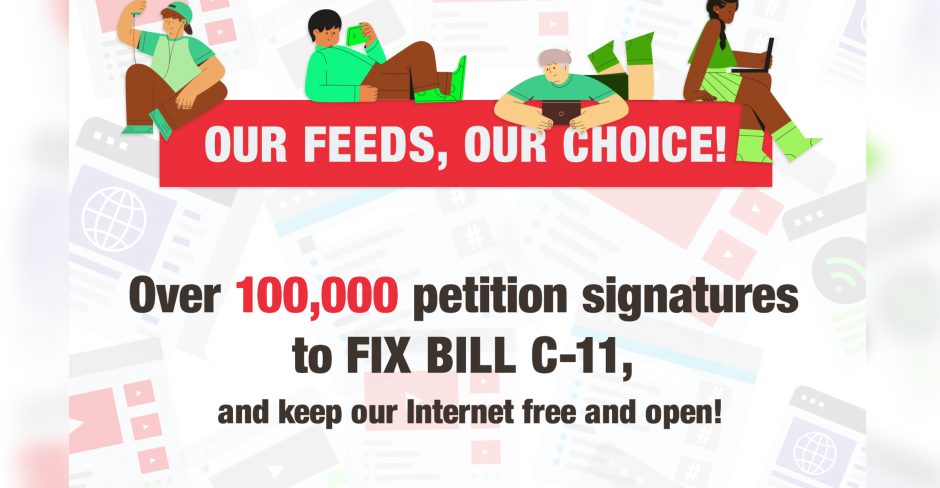 OpenMedia, a non-profit organization working to keep the internet “open, affordable, and surveillance-free,” today delivered a petition opposing the controversial Bill C-11 (aka the Online Streaming Act) with over 104,000 signatures to the Senate.

Bill C-11 is an amendment to the Broadcasting Act that aims to support the creation and promotion of Canadian content online. It is designed to give the Canadian Radio-television Telecommunications Commission (CRTC) regulatory authority over online streaming platforms like YouTube, Netflix, and others.

In its current form, however, experts believe Bill C-11 is too vague and gives the CRTC too much power. It could potentially even put user-generated content under the watchdog’s purview — in fact, outgoing chair Ian Scott previously admitted it will do as much.

For weeks, OpenMedia was running a campaign to organize Canadians against the legislation. Its efforts were even touted by Youtube, which is also opposing Bill C-11. OpenMedia said the campaign, which created a two-thousand-page-long petition, was a “passionate movement to protect our feeds, content, and online choice.”

“Over 104,000 people in Canada have called for this change, and they’ve been heard. The Senate’s amendment removes the vast majority of our content from the CRTC’s control, while capturing professional content that supporters of Bill C-11 were concerned about. We’re very happy with this amendment, and are calling on MPs of all parties to accept it and see it passed in the House.”

The Senate tacked numerous amendments onto Bill C-11. Following a third reading at the Senate, the legislation will make its way back to the House of Commons, where MPs will decide whether any (or all) of the Senate’s amendments should be accepted. The Liberals originally rushed Bill C-11 through the House back in June, but they needed support from the NDP and Bloc Québécois to do so.

“Unfortunately, not all is well in the Senate’s cut of Bill C-11,” Hatfield continued.

“A nasty last-minute surprise was the introduction of a requirement to prove our ages to access any online platform hosting any adult content. The privacy and freedom of expression consequences for millions of Canadians could be enormous, yet the Senate did not hear from a single expert witness on this proposal. We are calling on both the Senate and House to strike this amendment and consider how to protect children online through a full and separate legislative process.”

What’s more, the Senate made no amendments to address the broad scope granted to the CRTC to regulate the algorithms used by streaming platforms to serve online feeds and search results.

Scott said earlier this year that Bill C-11 will allow the CRTC to “manipulate” streamers’ algorithms. However, YouTube has warned that changes to its discoverability system could significantly hurt Canadian content creators. Echoing these concerns, creators have argued that Bill C-11 could hurt the visibility of their content, both in Canada and elsewhere, ultimately impacting their livelihoods.