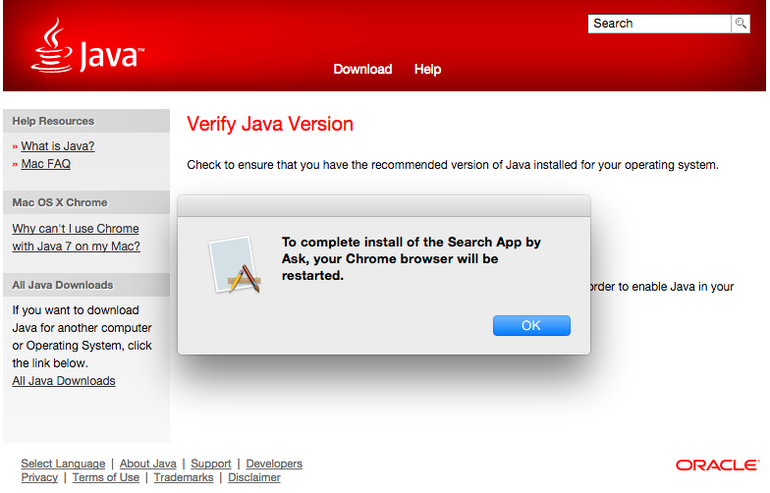 Oracle has started including the same annoying adware it has been bundling with its Windows installer for past many years, in the default installer of Java for OS X using the same deceptive techniques that convince users to install the unwanted add-on, ZDNet is reporting. Apparently the latest release of Java for Mac includes the Ask.com adware with its default installation, by changing homepages in the process. The Ask add-on then shows up if a user downloads Java 8 Update 40 for the Mac.

In my tests on a Mac running that latest release of OS X, the installer added an app to the current browser, Chrome version 41. (In a separate test, I installed Java using the latest version of Safari, where it behaved in a similar fashion.)

As with its Windows counterpart, the Java installer selects the option to install the Ask app by default. A casual Mac user who simply clicks through the dialog boxes to complete the installation will find the app installed and enabled in their browser, with the New Tab page changed to one with an Ask search box.

The worst thing about the Ask add-on is that even if you try to use it, the Ask search page will return low-quality results that are heavily loaded with ads, most of which are not clearly distinguished from organic search listings. Fortunately though, it is relatively easy to uninstall the Ask Search extension from both Chrome and Safari on Mac.

To get an idea of how big the Adware business is, IAC, the parent corporation that owns Ask.com, recently revealed that its Search & Applications Division made nearly $1.6 billion in revenue and $311 million in operating income in 2014.