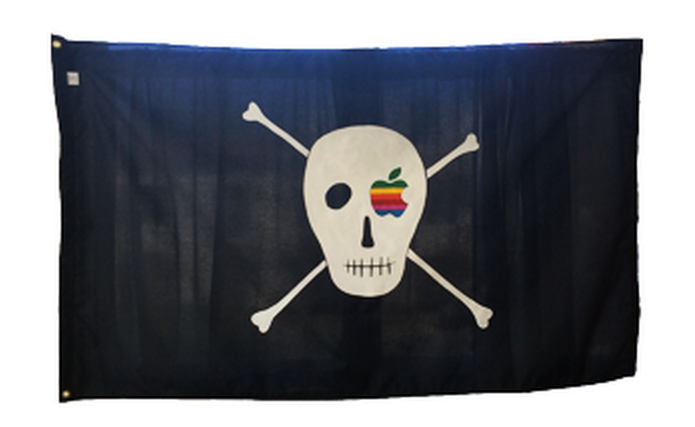 Susan Kare, one of the designers behind the original Macintosh icons and fonts, is selling replicas of Apple’s legendary pirate flag.

The team behind the original Macintosh hoisted the flag above their office as a tribute to one of Steve Jobs’ most famous quote: “It’s better to be a pirate than join the navy.” The flag was designed by programmer Steve Capps and Susan Kare in 1983. The flag reportedly flew over the office building for years before it became a part of computer history.

“Each flag is a hand-painted (acrylic paint on a black nylon flag with brass grommets) re-creation of the flag that flew over Bandley 3, the Macintosh building at Apple, Inc. in 1983. Susan Kare painted the original in response to one of Steve Job’s slogans at a Macintosh offsite: “It’s better to be a pirate than join the navy.” She will custom paint a similar version for you on a 3’ x 5’ or 4’ x 6’ flag. Note: these are fine art paintings intended for indoor display (not outdoor flagpoles). Some paint can be seen on the reverse side.”

Kare is now selling replicas of the original black flag in two sizes: 3ft x 5ft and 4ft x 6ft. The pirate flag replicas are selling for $1,900 and $2,500, respectively. Both sizes are available for purchase on Kare’s website.