After releasing iOS 8.4, Apple also pushed out OS X 10.10.4, which included notable improvements, as detailed in the release note. What’s not there in the release notes, though – and it is still a major change, especially for those who extended the life of their Mac with an SSD – is that the update lets users enable TRIM for third-party SSDs. 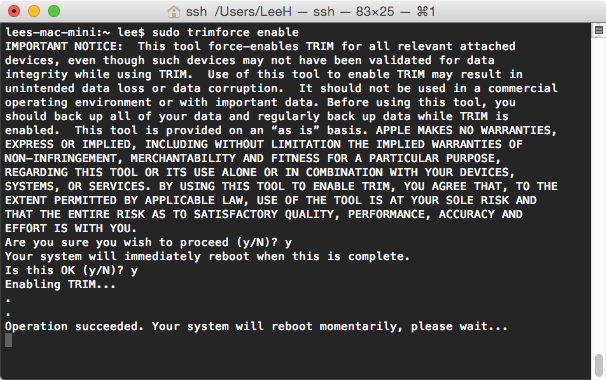 You may recall that we discussed this topic several weeks back as being a great addition to OS X El Capitan. Well, the tweak arrived much earlier, as discovered by Ars Technica. The update, they say, comes with a utility called “trimforce”, which can be executed from the OS X terminal, and you need to restart your computer to get it working.

Ars Technica tested trimforce on a pair of old Macs with aftermarket SSDs in them, and they experienced no issues, although they did get a warning message that would scare regular users, before enabling trimforce.

But it is important to note that not every disk implements TRIM in the same way, Ars Technica highlights, so be aware, you are doing this at your own risk. But it is worth it.