Just over two weeks after its initial public release, OS X Mountain Lion has released the first developer’s beta update which can now be downloaded through the Mac Developer Center web portal. The update is labelled as OS X Mountain Lion 10.8.1 build 12b13 and is downloadable as 38.54MB DMG file. While some might have hoped this update will fix the extensive battery drain issues experienced by MacBooks, unfortunately it does not address that problem. Apple has however asked developers to focus on testing Active Directory, Microsoft Exchange in Mail, PAC Proxies in Safari, SMB, USB, and WiFi and Audio when connected to the Apple Thunderbolt Display, according to 9to5Mac. 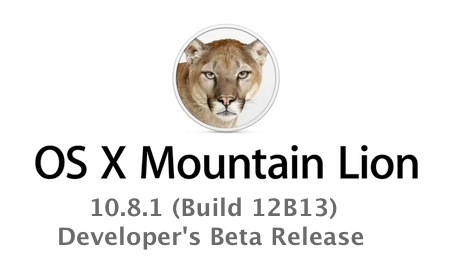 Below are the official release notes:

Please be aware that you will not be able to revert back to your previous system after updating. Please install this update on a system you are prepared to erase if necessary.

– Wi-Fi and audio when connected to Thunderbolt display

Apple has neither introduced Facebook integration nor the iMessage phone number merging feature in this update.