A new Apple patent application published today by the U.S. Patent and Trademark Office (USPTO) titled “Crystalline Gold Alloys with Improved Hardness”, has revealed the technology behind the process that creates the yellow and rose gold alloys found in Apple’s higher-end Apple Watch Edition line. According to PatentlyApple, Apple’s invention details gold alloys with improved strength and hardness for applications including enclosures for electronic devices, such as the Apple Watch. 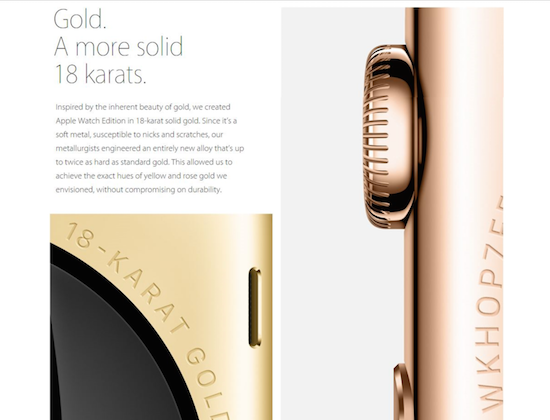 Apple explains that commercial gold alloys, such as the 18 karat gold (Au) alloy, have relatively low yield strength and low hardness (e.g. about 130-150 Vickers). Some gold alloys have been developed to have improved hardness of about 240-250 Vickers, but are still less than 300 Vickers. However, Apple’s invention relates to gold alloys with improved strength and hardness of at least 280, 290, or 300 Vickers. The alloys provide yellow gold color and rose gold color, while also also providing better surface finish after polishing.

The patent application was originally filed by Apple in Q3 2014. Also, check out the Apple Watch video about their gold creation process at this link.