PC Financial Refuses to Give a Clear Answer About Apple Pay

The excitement over Canada’s ‘Big 5’ banks finally all supporting Apple Pay as of today, almost feels like the day the iPhone 3G launched in Canada. We’ve waited almost two years for Apple Pay to hit our banks and we can now utilize the full potential of our iPhone and Apple Watch devices for mobile payments.

There are still some banks that have not announced support for Apple Pay yet. While Tangerine clarified they would have the mobile wallet up and running by the “end of July”, PC Financial can’t make up its mind on what to tell customers yet.

The company’s social media team has been berated by customers demanding an answer about whether or not they will support Apple Pay, some accusing the bank of “stringing” them along. The communications team has resorted to mass copy and paste replies on Twitter, saying “Though Apple Pay is not currently available via PC Financial we’re exploring all possible mobile payment solutions. Stay tuned!” 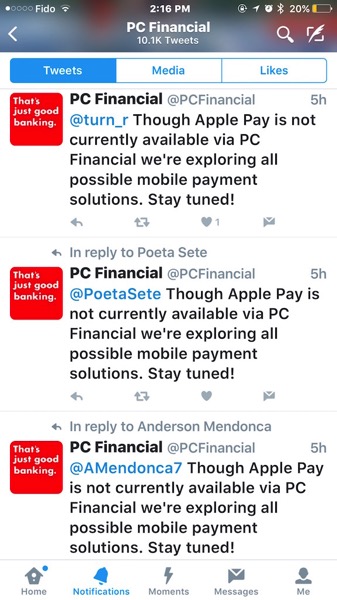 PC Financial is a subsidiary of Loblaws, with banking services provided by CIBC; the latter supports Apple Pay, so you would think support is forthcoming. If nothing materializes by the time Tangerine jumps on board sometime in July, it might be worth considering switching banks, if you’re desperate to use Apple Pay (it’s worth it).

PC Financial customers–what are you going to do? Wait a bit longer or go switch banks?