As we previously reported (thanks tipsters!), TD Canada Trust has officially launched Apple Pay today, joining CIBC, RBC, and ATB, who had already deployed the mobile payments service on May 10. 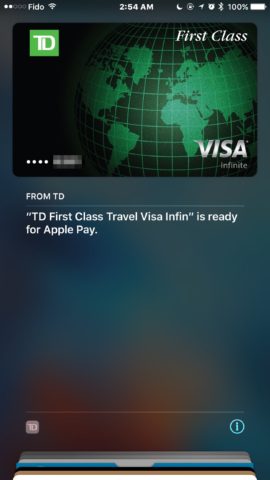 With TD on board, and BMO and Scotiabank following suit, all five major financial institutions in Canada now back Apple Pay, as the iPhone maker has finally managed to crack the resistance of the banks. 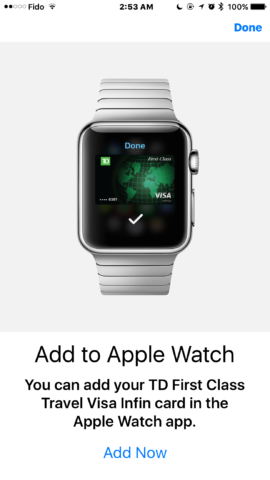 You may recall that we informed you about the ongoing briefing of TD employees on Apple Pay, so everything has been pointing to a rapid deployment of the mobile payments service.

Scotiabank said the following about today’s Apple Pay launch in a statement:

“At Scotiabank, we are embracing a digital transformation and are committed to providing our customers with safe, secure and innovative financial tools and services that are tailored to their needs,” said Mike Henry, Executive Vice President of Retail Payments, Deposits and Unsecured Lending at Scotiabank. “We are delighted to add Apple Pay to our robust line-up of mobile payment solutions.”

“Adopting Apple Pay is about offering choice and convenience to our customers, about 50 per cent of whom have an Apple device,” adding “Today’s launch allows our customers to use their iPhone or Apple Watch securely for everyday purchases.”

Meanwhile, Mike Henry, Scotiabank’s executive VP of retail payments, deposits and unsecured lending, told the Post “All of these things take time to build,” further adding “Any gap since Apple’s first announcement in Canada is one that can be measured in days and so we are just happy to be offering the new option for customers.”

Avinash Chidambaram, VP, Product and Platform Development, Interac Association and Acxsys Corporation, said in a statement “We’ve heard from Interac debit cardholders across Canada who are eager to use Interac with Apple Pay,” adding “With today’s announcement marking the widespread availability of Apple Pay for Interac debit cardholders, we’re excited that even more Canadians will be able to experience the convenience and simplicity of making an Interac debit transaction using their iPhone or Apple Watch.”

Apple has updated their list of Canadian banks that now support Apple Pay, with today’s additions in bold:

Don’t forget to read our Apple Pay FAQ and also how to check out faster with Apple Pay.