PC Shipments Down in US, Mac Sales Up Gartner Study Reveals

Market research company Gartner released the preliminary results of worldwide PC shipments, noticing a nearly 5% decline from the fourth quarter of 2011 on a global scale and 2.1% on a year-over-year basis in the US. 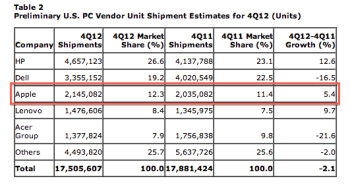 An interesting note of Mikako Kitagawa, principal analyst at Gartner: “Tablets have dramatically changed the device landscape for PCs, not so much by ‘cannibalizing’ PC sales, but by causing PC users to shift consumption to tablets rather than replacing older PCs.”

“The PC market continues to face many headwinds. The launch of Windows 8 had no impact on PC demand, especially as Ultramobile products were both limited in supply, as well as being priced too high,” said Ranjit Atwal, research director at Gartner. “The holiday season mostly saw retailers clearing Windows 7 notebook inventory or driving volume of low-end notebooks. Furthermore, the increasing choice of tablets at decreasing price points no doubt became a favorite Christmas present ahead of PCs.”

In the US, the Cupertino company ranked third, retaining 12.3% of the market with a unit sales increase of 5.4% on a year-over-year basis. HP, however, outpaced Apple with a tremendous 12.6% growth, while Dell retained the second spot despite losing a significant 16.5% market share. Lenovo is gaining traction recording a 9.7% growth compared to the same period a year prior.