TechCrunch has a scoop on Pebble, claiming the smartwatch maker whose rise to fame via Kickstarter may be in financial trouble, as sources say the startup is looking for venture capital funding and bank loans in order to keep operations running:

According to sources close to the company, the company is having trouble maintaining its growth and has turned to a Silicon Valley bank for a $5 million loan and $5 million line of credit. Valley VCs have been turning down the company’s requests for new capital. 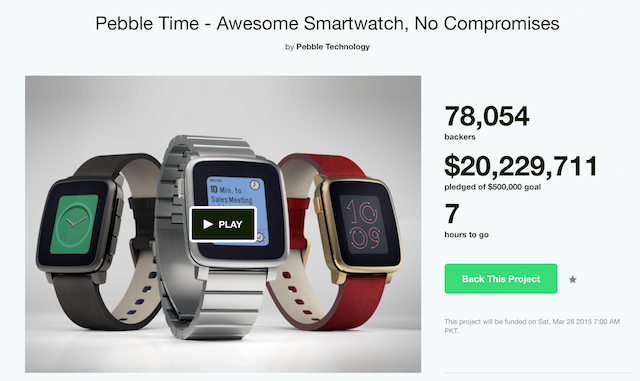 Sources say Pebble has sought a bank loan “in order to stay afloat,” despite raking in $18 million from its latest Kickstarter campaign for its new Pebble Time watch after fees.

Those familiar with the matter claim some employees are unhappy with the direction the company is taking as it faces competition from the Apple Watch, Android Wear and more. The company has 150 employees and continues to hire more, through Jeff Hyman, former legal counsel for Apple.

However, one current employee, speaking on the condition of anonymity was optimistic, saying “the outlook for Pebble is very positive.”

Of course, this is just a rumour and Canadian Pebble CEO Eric Migicovsky declined to comment on the story.

If the story is true, this probably doesn’t won’t sit well for backers of the smartwatch, particularly those waiting to receive the new Pebble Time. But then again, it could a plant by rivals to downplay the success of Pebble so far as a viable smartwatch company backed by a massive developer community.