Petition for Apple to Keep the Headphone Jack Surpasses 217,000

With recent rumours claiming Apple may ditch the standard 3.5mm headphone jack in the upcoming ‘iPhone 7’, an online petition on Sum Of Us has gained steam, pleading the company not to do so. 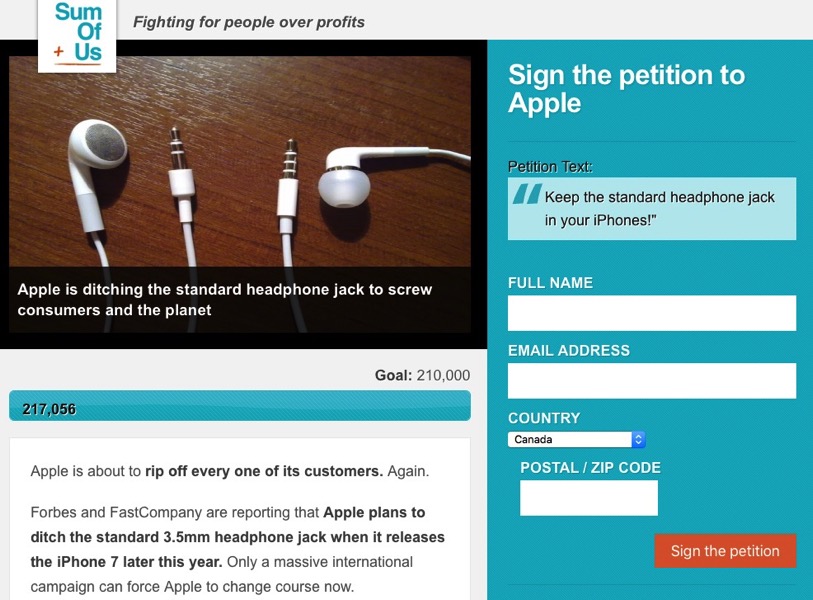 The petition claims “Apple is about to rip off every one of its customers,” and that “only a massive international campaign can force Apple to change course now.”

Reasons why Apple should keep the headphone jack, note the petition, are to prevent the massive amounts of electronic waste from unused headphones, similar to what happened to the old standard iPod connector replaced by the Lightning port.

My mother-in-law forwarded me an email with a link to this online petition a few days ago. She doesn’t follow tech news closely but this petition made it into her inbox. People are really concerned about the headphone jack heading the way of the Dodo bird.

What are your thoughts about the 3.5mm headphone jack possibly disappearing in the next iPhone? Are we ready to go wireless and Bluetooth everything?

Users of YouTube for iPhone and iPad have been complaining about the app crashing repeatedly. If you’ve been plagued with this issue with the YouTube iOS app, rest assured a fix is coming. According to YouTube on Wednesday, the company said, “hi, we’re aware that many of you using the YouTube app on iOS devices […]
Gary Ng
38 mins ago