In case you thought other tech players would sit relaxed and allow Apple’s iBeacon to conquer location-based services, well, you should think again: Philips has just announced its own version of such a service in the form of smart LED lights (via Engadget).

Indeed, instead of using low-power Bluetooth, Philips is testing a new LED lighting unit in Düsseldorf (Germany) that is able to communicate with a smartphone app and guide the customer in the hypermarket.

The technology is called Intelligent Lighting, and it is connected to the retail store’s lighting system and has two jobs to fulfil: The first one is to illuminate the store, and the second one is to create a GPS-style grid on a smartphone.

The system works by using lighting fixtures that form a dense network that not only provide high quality light but also acts as a positioning grid. Each fixture is identifiable and able to communicate its position to an app on a shopper’s smart device. This enables the shopper to get information related to his position in the store as they move around the store and location-based services to be triggered. Communication with the smartphone is by Visual Light Communications.

In use, the scenario looks like this: The shopper enters the store and opens the associated app. As he/she moves in the store, the app will show relevant discounts, and it could make suggestions for alternative products. 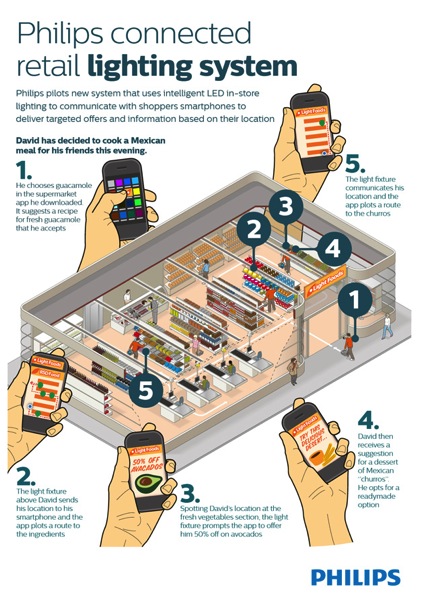 As you can see, this is very similar to Apple’s iBeacon, which has been successfully implemented in the company’s own retail stores, Macy’s, and most recently in two Major League Baseball ballparks. Since the retailers have yet to adopt such technology, competition is very much on.

Supercell, a Finland-based game developer owned in large part by China's Tencent, launched an external store for in-app purchases back in June to circumvent Apple's and Google's infamous 30% commission on all transactions made through the App Store or Play Store, respectively. The Supercell Store launched with digital items for the popular mobile strategy game Clash...
Nehal Malik
1 hour ago