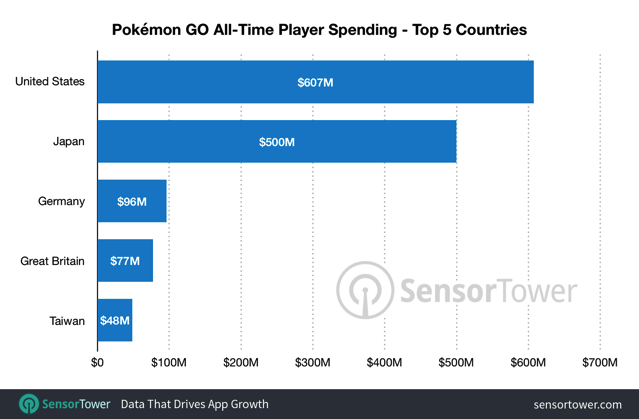 According to the latest Sensor Tower Store Intelligence estimates, Niantic’s smash hit game Pokémon GO, which made its debut two years ago today, has surpassed $1.8 billion in player spending. And all these months later, players continue to spend more than $2 million per day to catch the dozens of Pokémon that have been added since launch.

Niantic continues to refine and expand the game two years in, most recently adding the much-anticipated ability to trade Pokémon with friends, and acquiring technology that will make the core monster catching mechanics even more rewarding for players.

There’s also still the planned rollout of the game in China, which will see Niantic partnering with mobile giant NetEase to bring Pokémon GO to the country’s players.

The report notes that Pokémon GO’s all-time player spending is led by the United States and Japan, accounting for 34% and 28% of its revenue across iOS and Android respectively. Top five countries are rounded by Germany, Great Britain, and Taiwan at 5%, 4%, and 3% of revenue respectively.

In terms of platforms, Google Play has accounted for 58% of Pokémon GO’s revenue, with the App Store responsible for the remaining 42%. The game also holds the record of remaining the world’s No. 1 earning app for 74 consecutive days during the summer of 2016.

As of today, Pokémon GO is in the App Store’s top 10 grossing charts on 21 countries, including the U.S., Great Britain, Germany, and Canada.