We’re a day away from Apple’s ‘Let’s Talk iPhone’ media event, and so far the rumours of what will be announced have been divided. One side believes Apple will release a cheaper iPhone 4 (codename N90A), alongside the iPhone 4S with upgraded hardware (A5, 8MP camera, 1GB RAM, Assistant, etc). The other side believes it will be the cheaper iPhone 4 and an all-new thinner, teardrop designed iPhone 5, with a larger screen. With rumours of 64GB capacity, I think we will finally see that come true given our insatiable thirst for apps and HD video recording. 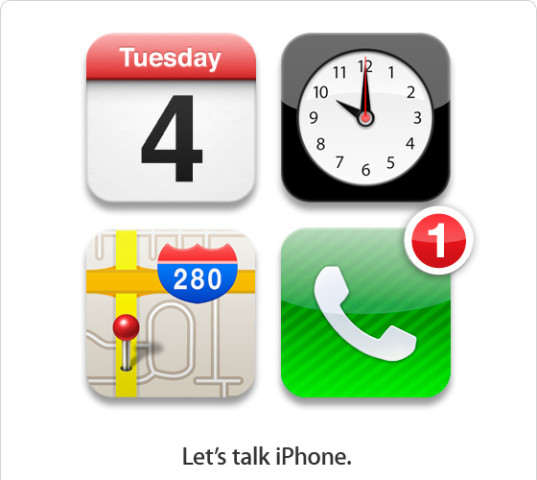 As much as I’d like to see a new redesigned iPhone 5, I don’t think it will be coming on Tuesday. Evidence from component parts have not revealed a new design, and the problem with the ‘teardrop’ is a topside heavy and non-symmetrical device, as noted by John Gruber, who is highly skeptical of the design. If there is something ‘new’, Apple must be magically producing it at a secret factory we don’t know about–because leaks of an all new design are only based on a silicone cases in the wild.

Apple has managed to produce an extremely popular design in the iPhone 4, the most popular cellphone in Canada. They aren’t fighting in the trenches of hardware specifications like Android OEMs are–they’ve killed it with their software. iOS 5 GM is set to be announced on Tuesday. Maybe Apple is holding back on some sort of new software feature we haven’t heard about. That is most likely the card kept closest to their chest, immune to leaks unlike their supply chain.

Android has its place for ‘non-iPhone’ users, those who love to customize and tinker to their hearts’ content. We’ve yet to see anything impressive and real from Microsoft and Nokia, aside from their classic ‘vaporware’. RIM keeps talking up QNX (talk is cheap, isn’t it), and WebOS is pretty much dead.

Does Apple really need to introduce a revolutionary new design, given their competition still can’t keep up? No. Apple will milk the the advantages they possess, and wait until they are truly threatened before announcing a new design. They were able to do this with the iPhone 3GS (when competitors failed miserably with their ‘iPhone killers’), and it appears we are headed down the same path with the ‘iPhone 4S’. This device will ‘satisfy’ the need for users looking to upgrade, and Apple will continue to flood the market with the cheaper iPhone 4. As much as I would like a brand new design, I think I might be disappointed just like at WWDC, when we thought Apple would announce a new device. Nothing came, and we moved on.

Apple is known to have planned its timeline for products years in advance (Multi-Touch was invented for the iPad, but Steve Jobs decided Apple should put it to use in a phone first). For the iPhone, this is just the next step in the evolution of what has turned into for many the last phone we will ever own–until something better comes along.

Canada to Get the iPhone 4S Just Like Everybody Else?

Will Canada be included in the initial group of launch countries? I don’t think so. We will most likely wait a couple weeks or more past the rumoured October 14th U.S. availability date. But, do remember we were included in the worldwide launch of the iPhone 3G. So anything can happen in the next day or so.

Let’s be clear–nobody knows for sure what will be announced on Tuesday, but it will be something great. Just accept what is going to be announced. Those with high expectations are bound to be disappointed, so don’t set yourself up for disaster. New iPhones are coming–bring it on, Apple.