Apple’s new Private Relay feature for iPhones isn’t sitting well with carriers, and some operators are doing all they can to squash the privacy setting before it reaches your iPhone. 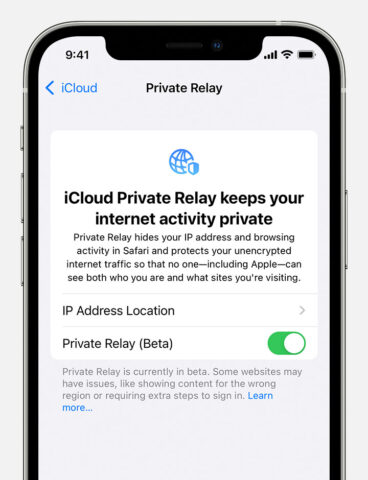 Announced at last year’s WWDC, Apple’s Private Relay is a new iCloud+ feature that pushes users’ web traffic requests through encrypted VPN-like filters so nobody — not even Apple — can see their internet traffic. It crucially protects users from ISPs or websites that might use their DNS records and IP address to generate profiles and serve targeted ads.

Instead of tunneling users’ data like a VPN, Private Relay encrypts the data before passing it through an Apple-managed proxy server that decouples the DNS request from a user’s IP address then moves it on to an undisclosed “trusted partner” that uses a fake approximate IP address.

While it has several limitations — the feature only works in Safari, users need a paid iCloud+ account, and it doesn’t hide one’s region — Private Relay is generally regarded as a useful privacy tool, if short of being a full VPN.

Now it’s being reported that at least some subscribers using T-Mobile US and Sprint in the US, carriers in Europe, and EE in the UK may be unable to use Private Relay on their iPhones when using cellular data due to their network operator’s intervention.

T-Mobile US in a statement said folks are only blocked if they have filtering enabled on their account, which Private Relay would break: “Customers who chose plans and features with content filtering (e.g. parent controls) do not have access to the iCloud Private Relay to allow these services to work as designed. All other customers have no restrictions.”

However, 9to5Mac noted that “many of the users we’ve heard from, and tested ourselves, do not have any such content filtering enabled,” and so the situation doesn’t appear to be so clear cut. Internal files from T-Mobile US suggest that for some people, at least, it doesn’t matter if they enable the filtering or not — the fact that it’s available on your cellphone plan is enough to block Private Relay.

“Customers who chose plans and features with content filtering (e.g. parent controls) do not have access to the iCloud Private Relay to allow these services to work as designed. All other customers have no restrictions,” a T-Mobile representative wrote in an email.

Private Relay is currently in public beta in iOS 15, iPadOS 15, and macOS Monterey. The feature is turned off by default and must be manually enabled within Settings.

Update Jan. 11: T-Mobile told Bloomberg’s Mark Gurman, “Overnight our team identified that in the 15.2 iOS release, some device settings default to the feature being toggled off. We have shared this with Apple. This is not specific to T-Mobile. Again though, we have not broadly blocked iCloud Private”