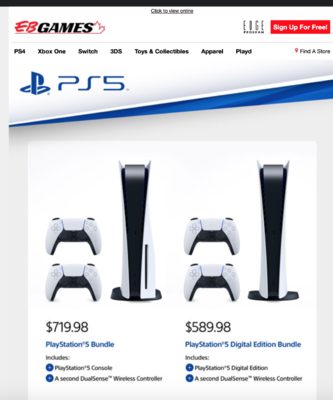 Update Dec. 3: Both EB Games and Walmart.ca have initiated landing pages for this PS5 restock, to prevent their websites from crashing. Good luck.

Are you still looking to buy a Sony PlayStation 5 (PS5) in Canada? Forget lining up at malls, try finding one online.

Starting on Thursday, December 3, you’ll be able to buy the PS5 online from EB Games Canada and Walmart Canada.

EB Games shared the details in an email to customers today, which noted PS5 stock would be available online on Dec. 3 at 8am PST/11am EST, noting “while supplies last.”

Walmart Canada will also have PS5 stock on Thursday, December 3, at 8am PT/11am ET, with the following available online:

Are you still searching for a PS5 for the holidays?