Not so long ago a rumour hinted that the iPhone 6 will see a “minor” battery upgrade n comparison to that of the iPhone 5s. French site Nowhereelse has obtained two images of what they believe is 4.7-inch iPhone 6 battery unit and they do indeed seem to corroborate the previous claims. 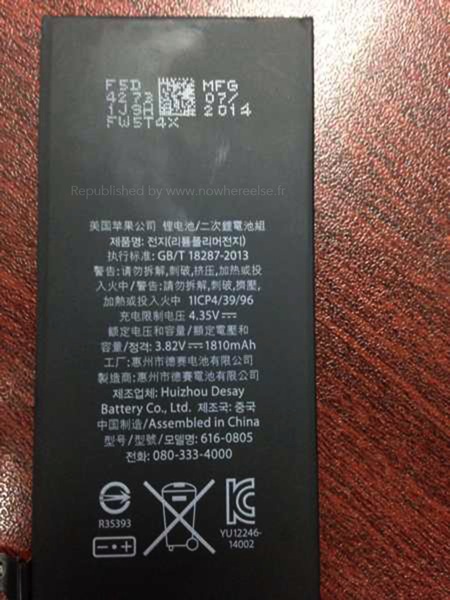 In accordance with the previous reports, the image above shows a battery with a 3.82 V, 1,810 mAh capacity. The battery unit is apparently manufactured by Desay, the battery supplier mentioned in the Apple 2014 Supplier list. You may recall that Desay was supposedly facing battery production issues, so Apple needed to add another supplier, Simplo — claimed the rumour mill.

Anyway, from the photo it appears that Desay’s production is alive and well: or this is one of the defective battery units that will never make it to the next generation iPhone?

While this could be a genuine iPhone 6 battery, we must not forget that there are iPhone 6 clones available out there, so this could be easily the battery unit of, for example, the Wico i6.

Apple is expected to release two iPhone 6 models this fall.