Push Mail for the iPhone 2.0 is Coming

The iPhone is awesome for checking email on the go, or when you’re just roaming around the house and don’t have time to get onto the computer. One shortfall whenever I’m checking my Gmail IMAP account is that there is no “push” functionality. I need to manually check for new email every 10 minutes or so like a drug addict!

Well, when I read this story, I thought to myself, “Bring it on, Apple!” With the recent release of the latest iPhone OS 2.0, screenshots have revealed that certain applications will have “push” capabilities. Under Settings, there is an option to set “Push” for every 15 minute, 30 minute, or hourly interval.

Newly posted iPhone OS 2.0 pictures have also revealed that .mac email will have “push” capabilities. We know that Yahoo! mail users already have “push”, all we need to do now is wait for our friends at Google to enable “push” for Gmail! I am confident they will make an announcement in the future about that change. They love their iPhones at Google!

Although this would be great for those with “push” capable accounts, my only concern would be how the iPhone’s battery life would be affected by all this if you’re a heavy email user. Let’s hope that when the 3G iPhone is announced this June, the battery will be upgraded to account for the new features we’re going to see! 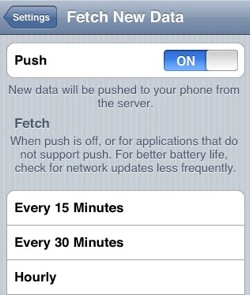 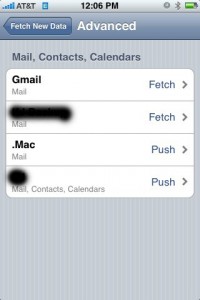 Thanks to TUAW for the screenshots.