Apple has used LTE modems from two different sources, Qualcomm and Intel, in its latest flagship iPhone 7 and iPhone 7 Plus, with A1778 and A1784 iPhone models carrying a GSM-only Intel XMM7360 modem, while the A1660 and 1661 using a GSM/CDMA-compatible Qualcomm MDM9645M LTE modem. However, new tests conducted by Cellular Insights show that the Qualcomm modem outperforms the Intel modem by a significant margin (via MacRumors). 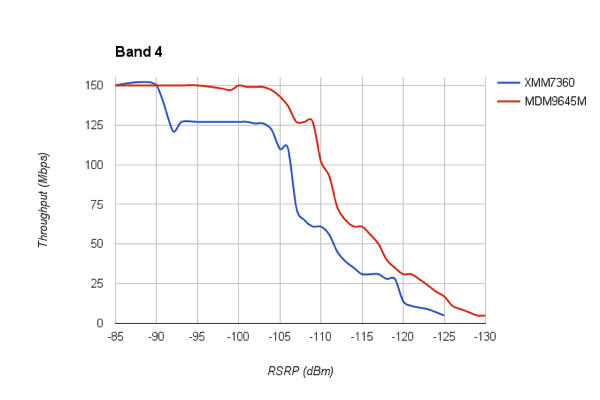 The experts created a setup that simulates LTE performance at different distances from a cellular tower using two iPhone 7 Plus devices, one with an Intel modem and one with a Qualcomm modem.

The goal of the test was to measure the highest achievable LTE throughput starting at a Reference Signal Received Quality of -85dBm, and gradually reducing the power level to simulate moving away from a cellular tower. LTE Band 12, Band 4 (the most common band in North America), and Band 7 were tested.

Both iPhone 7 Plus variants perform similarly in ideal conditions. At -96dBm the Intel variant needed to have Transport Block Size adjusted as BLER well exceeded the 2% threshold. At -105dBm the gap widened to 20%, and at -108dBm to a whopping 75%. As a result of such a huge performance delta between the Intel and Qualcomm powered devices, we purchased another A1784 (AT&T) iPhone 7 Plus, in order to eliminate any possibility of a faulty device. The end result was virtually identical.

At -121dBm, the Intel variant performed more in line with its Qualcomm counterpart. Overall, the average performance delta between the two is in the 30% range in favor of the Qualcomm.

In all three tests, both the iPhone 7 Plus models offered similar performance in ideal conditions, but as power levels decreased, the Qualcomm modem maintained noticeably higher throughput speeds than the Intel version.