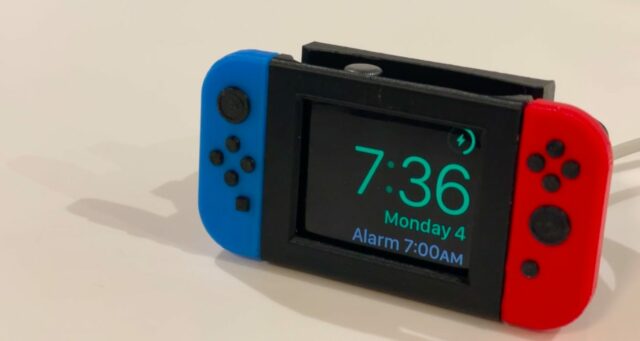 A Reddit user has created a cute, yet accurate Apple Watch charging dock with a design inspired by the Nintendo Switch.

First seen by Creative Bloq, Reddit user u/SPACE-DRAGON772 shared a short video of the charger in action. The user 3D printed the original concept and shared it on the r/3Dprinting subreddit.

The dock features a fairly simple design. The Apple Watch USB charger simply slots into a hole in the rear side of the dock. The cord is then fixed in place. Afterwards, the Apple Watch can then be placed into the slot where an opening will display charge progression, time, and whatever is on the face.

Since publishing the video, the user has received a ton of positive reception. With droves of Reddit users, and even users on TikTok reacting to the video, willing to pay, u/SPACE-DRAGON772 shared the 3D printing template.

Other users have cracked the joke that a cease and desist letter may be imminent for the Reddit user. Jokes aside, both Apple and Nintendo are very protective of their products and IP. If you are eager to have your own, perhaps it’s a good idea to flip on that 3D printer of yours and get started just in case.

This is another example of how perfectly two brands can meld together to make something unique and cool in the tech space. Apple Watch and Nintendo Switch don’t inherently go together but u/SPACE-DRAGON772 thought of a concept that really does stand out and is starting to gain some viral attention.