After two years of development, the official Robinhood iOS app has finally hit the U.S. App Store today. According to TechCrunch, the zero-fee stock trading app took $16 million in funding and 500,000 waitlist signups before it eventually launched, allowing users to track the performance of stocks and buy or sell them for free, unlike E*Trade where you need to pay $8 to buy or sell a stock. 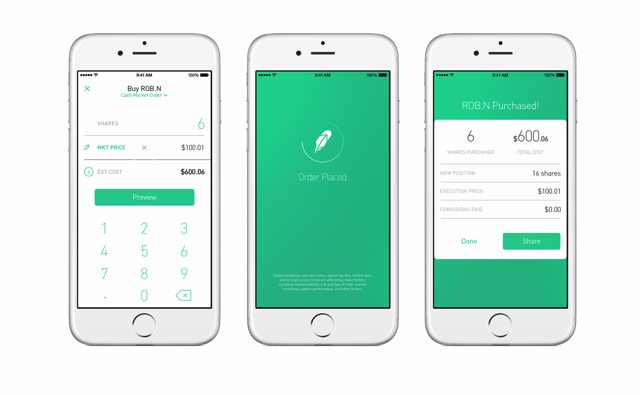 Since the app allows people to trade smaller amounts without having their potential earnings eaten up by brokerage charges, Robinson has the potential to attract a younger, less wealthy demographic to the stock market. The source notes that Robinhood basically makes money through” interest on funds you hold with it or when you trade on margin”, plus selling trade volume to stock exchanges.

Robinhood founders Baiju Bhatt and Vlad Tenev say that by replacing brick and mortar branches and TV marketing budgets with a handful of engineers and mobile virality, Robinhood was able to ditch the commission fee.

“When I asked for specifics on how Robinhood will make money, the founders laughed, saying when you move money around, it never seems to tough to earn some for yourself. Just ask Wall Street. But the answer is first and foremost that Robinhood will earn standard interest on funds you add to your account. It will also charge its own interest rate if you buy on margin while waiting for cash from stocks you’ve sold to clear into your account, or buy on credit from Robinhood”.

The co-founders also say that Robinson’s biggest worry right now is getting people who’ve waitlisted for a year onboarded as quickly as possible without any problems that could hurt the company’s credibility.

Update: Robinhood told us on Twitter they don’t have any plans to come to Canada “right now”:

@iPhoneinCanada No plans right now, but as we expand beyond the United States, we will keep the community posted!