Roku has today announced it is bringing AirPlay 2 and HomeKit support to select 4K streaming devices. 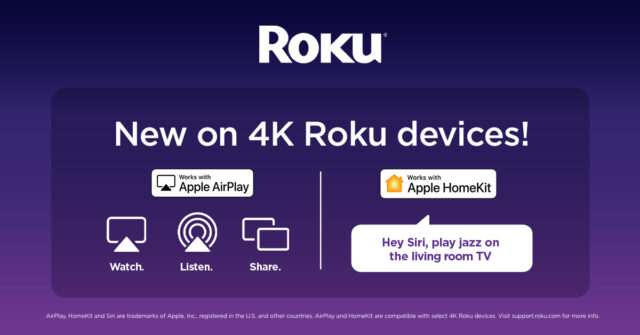 According to a new press release from the company, version 9.4 is rolling out to “select 4K Roku devices,” including the Roku Ultra player, Roku Streambar, Roku Smart Soundbar, Roku Streaming Stick+ and Roku Premiere.

The biggest changes, though, are for people who own an iPhone, iPad or Mac. Roku OS 9.4 plays nice with Apple’s AirPlay 2 standard, giving you another way to find and view your favourite content in the living room.

In addition to AirPlay 2, Roku OS 9.4 will bring support for HomeKit, which allows Roku owners to control their device using the Home app and Siri on their iPhone, iPad, Mac, Apple Watch, and HomePod.

AirPlay 2 allows you to send content from your iPhone, iPad, or Mac for playback on the Roku device. HomeKit lets you control the Roku through Apple’s Home app or with Siri voice commands.

“With the addition of Apple AirPlay and HomeKit support, our streaming players are now the first to offer compatibility with all three major voice systems, including Google Assistant, Alexa, and now Siri,” Roku’s Ilya Asnis wrote in the press release.

Other changes that arrive with 9.4 include a new “Live TV” tile to the home screen, featuring a live guide to The Roku Channel’s over 115 free live channels, as well as features to help users learn how to use voice commands, and updated theme packs that now include optional sounds.