In an effort to better compete with Amazon Alexa and Google Home, Samsung has launched a new Bixby app store called ‘Bixby Marketplace’ that allows Galaxy users to browse and download shortcuts with ease for use with the virtual assistant, The Verge is reporting. 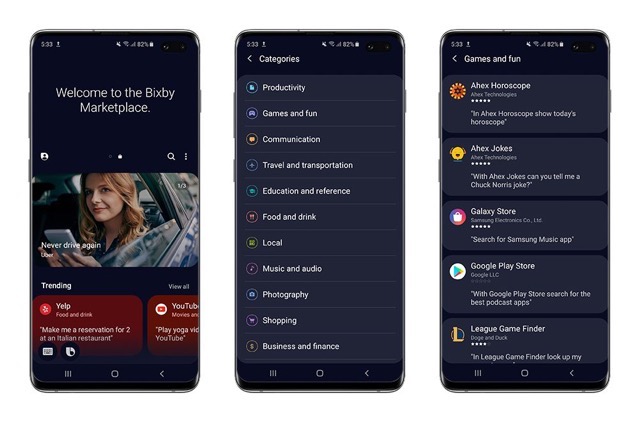 Dubbed “Bixby Capsules,” the shortcuts work pretty much the same way as the Alexa skills by allowing access to certain functionalities of an app using voice commands. The new Bixby app store also makes it easier to browse commands and Capsules through different categories of apps, such as games, productivity, travel, music, and more.

According to Samsung, Bixby marketplace and capsules will not allow visual ads, although it remains unclear whether audio-based ads will be allowed or not:

Users can also customize their capsule to a specific need. For example, if you prefer to use Uber or Lyft, you can select the transportation capsule to always request Uber rides when you ask Bixby for a car to the airport. Popular third-party apps include Spotify, Yelp, YouTube, NPR, and Google Maps (though, obviously Google Assistant is also available on Samsung phones and might be a better way to get the most out of Google-specific apps.)

Samsung will unveil its future plans related to the Bixby marketplace later this fall at its annual developer conference in San Jose, CA.