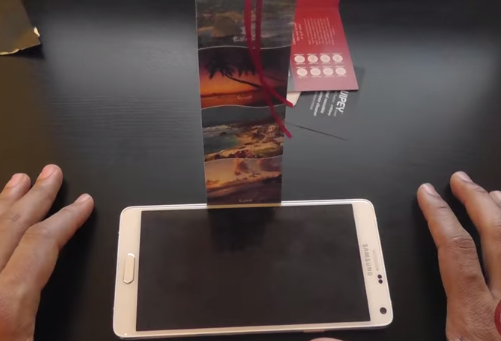 Do you even gap? Earlier this week Samsung users noted how the new Galaxy Note 4 came with a wide gap around the display and frame, allowing room for a business card to be inserted.

This apparent manufacturing defect had many alluding this to be Samsung’s ‘gap-gate’, referring to the recently overblown iPhone 6 ‘bend-gate’ issue.

Now, according to Android Central, that gap is actually a “manufacturing feature” of the device, according to the Galaxy Note 4’s instruction manual, hidden away on page 180 in the Troubleshooting section:

A small gap appears around the outside of the device case

A Samsung spokesperson told the Wall Street Journal the following:

The reported issue does not impact the functionality or quality of the Galaxy Note 4. We assure our customers that all Galaxy Note 4 units meet our strict manufacturing and quality control standards.

In other words, Samsung is saying you’re reading the manual wrong. This gap is actually a business card holder!

YouTube channel DIectronics puts ‘gap gate’ to the test and was able to fit a bookmark and business card into the so-called gap—check it out below:

There goes Samsung copying Apple again with its own ‘gap gate’.

Last night, The Game Awards 2022 was held both virtually and in front of a live audience of industry personnel. The night was dedicated to recognizing the games and studios that helped shape the past 12 months.  Host Geoff Keighley worked with a number of publishers and development teams to pack the award show with...
Steve Vegvari
2 mins ago