Last week, the folks over at PhoneBuff shared the results of their latest drop test between Samsung’s Galaxy S10+ and Apple’s iPhone XS Max to see which smartphone is more durable and today, they have uploaded a new video on YouTube that compares the battery life of the two flagship smartphones. 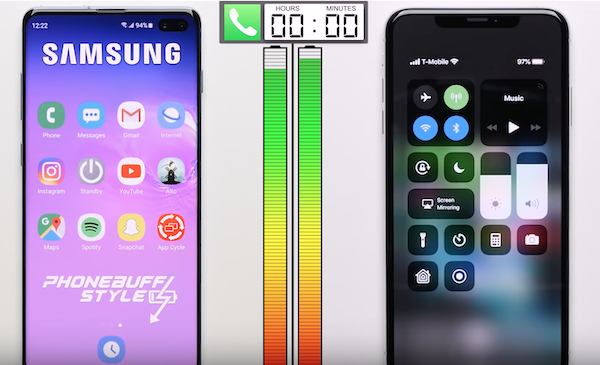 In order to find out which of the two smartphone’s battery lasts longer, several battery tests were conducted in a temperature controlled environment, with the screens and speakers calibrated for more accurate results. In terms of battery specifications, here’s how the two devices compare:

Any guesses who the winner is? We’ll let you watch the video and find out for yourself.


Other articles in the category: News

After iOS 16.1 beta users discovered Adaptive Transparency enabled for the original AirPods Pro and AirPods Max, we’re now finding out this is actually a “bug”. That’s according to what Bloomberg’s Mark Gurman shared on Monday morning, citing the MacRumors report. “I’m told this is a bug,” said Gurman in his retweet. He later clarified the […]
Gary Ng
5 seconds ago

Any shred of mystery Google was saving for its Pixel 7 series launch event on Thursday, October 6, likely dissipated when a detailed and legit-looking spec sheet for the two phones leaked online over the weekend (via 9to5Google). Apparently, a mobile carrier in Taiwan prematurely shared the spec sheet for Google's Pixel 7 and Pixel...
Nehal Malik
56 mins ago