Leading industrial designer Peter Bressler, former president of the Industrial Designers Society and the founder of product design firm Bresslergroup, said in a testimony for Apple today that Samsung is clearly infringing on multiple patents with its phones & tablets and that consumers could easily confuse one of Samsung’s devices with Apple’s (via CNET). He further argued that one of the key issues at stake is that industrial designers see things differently than consumers. Some consumers may see those details, but they tend to be somewhat “subconscious to the overall view”, he added. 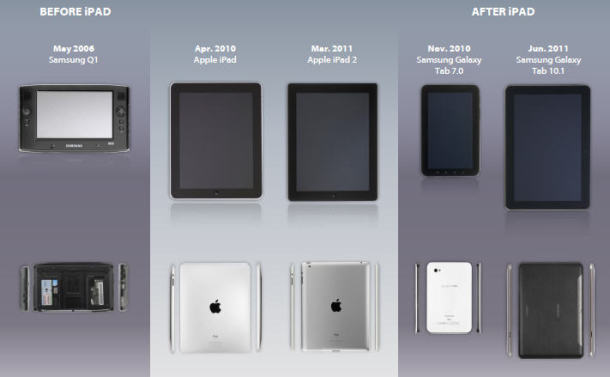 “My opinion (is) that there are a number of Samsung phones and two Samsung tablets that are substantially the same as the design in those (Apple) patents,” Bressler said.

To back that point up, Bressler, the inventor or co-inventor on about 70 patents, went through how nearly a dozen Samsung devices were similar to Apple’s. That includes Samsung’s first– and second-generation Galaxy S devices, as well as the company’s Galaxy tablets.

Bressler also attempted to gut Samsung’s prior art defense, which cites a Japanese design patent issued to rival electronics firm Sharp in 2005. That device, which Samsung suggests looks like the iPhone, is unlike the ones depicted in Apple’s patents since it has a curved, non-flat front, Bressler argued.

Despite those claims, Samsung’s attorneys pushed Bressler on how well he really knew how customers shopped, which included getting him to admit that he hadn’t witnessed any customers accidentally purchasing a product from either Apple or Samsung.

Samsung also attempted to raise questions about Bressler’s understandings of design, asking him about numerous details from button designs on Android phones, to the angles, and bezels on accused Samsung devices. At one point during cross-examination, Bressler became audibly irritated at the questions:

Bressler is just one of several design specialists Apple is calling on to make its argument, and told the court that he is being paid $400 an hour for his services, which so far had resulted in $75,000 worth of work.