Ars Technica has gone hands on with Tizen OS, a Linux-based mobile operating system developed by Samsung, and initial remarks are that the OS is a surprisingly accurate Android clone, but without any kind of ecosystem. The OS was tested on a prototype Samsung hardware that closely resembles a Galaxy S4 (via DaringFireball). 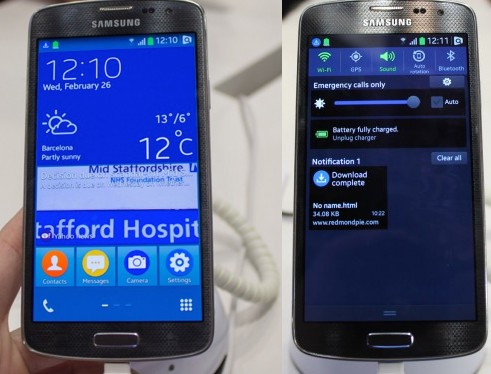 Looking at the photos, one can immediately tell that Samsung is trying real hard to make Tizen look like Android. In fact, Ars notes that Tizen may have influenced the new design of the Galaxy S5′s settings screen. “When we first saw the colored circles in a grid formation, we said the design looked like something that was from a completely different OS. It turns out that OS is Tizen”. The OS uses the same button configuration as many Android Samsung phones, with Menu, Home, and Back buttons. It also has home screen pages, a pull-down notification panel, and widgets just like Android.

“Samsung’s OS runs really, really well—it seems just as snappy and customizable as Android. Widgets are expandable—a swipe down on the weather widget, for instance, will expand a multi-day forecast panel from the bottom of the widget. Widgets and icons are actually the same thing—the widgets are resizable just like they are on Android, but shrinking a widget down to a 1×1 square will turn it into an icon, and expanding an icon to 2×2 will turn it into a widget. Both features are very slick, and they’re something we wouldn’t mind seeing Android adopt. Surprisingly, there were even a few Google icons pre-loaded on the Tizen prototype. There were YouTube and Google Search icons, which were just links to the mobile site.

One of the weirdest changes from the typical Android interface that Samsung has made with Tizen is in the notification panel. Individual notifications aren’t presented in a list, but as a two-wide grid of squares. There are other oddities, too, like the first page of the settings being a grid of squares and the second page being a list view.”

It seems that right now, the real problem for Samsung’s OS is apps. “While Tizen isn’t finished, at this point it seems like nothing more than an Android clone”.

“Samsung has yet to demonstrate a compelling reason for anyone to pick a Tizen device over Android or even demonstrate why it chose to spend resources developing Tizen instead of creating a Google-less AOSP fork. Our best guess is that it has become a matter of pride for the company”.

I wonder how Samsung plans to go from zero Tizen apps to millions of apps, all without losing its current Android market share. What do you think?