Back in March, BlackBerry CEO John Chen was the first to call iPhone users ‘wall-huggers’, referring to their constant need to be plugged into power outlets to recharge their phone’s batteries.

Four months later, Samsung took Chen’s coined term and applied it into an ad mocking iPhone users, a hilarious spot where Apple users were depicted as charging their devices anywhere an outlet existed (even the bathroom) at airports.

Now, according to CNET, Samsung is kicking up its marketing campaign against wall-hugging iPhone owners with targeted ads placed by charging outlets at select airports:

Samsung tells me that these angst-inducing ads will be gracing John F. Kennedy International Airport in New York, , as well as Chicago’s O’Hare and Midway airports. They may also appear at other airports.

Check out the picture below of what one of these Galaxy S5 ads will look like, sporting the tag line “So you have the power to be anywhere but here”: 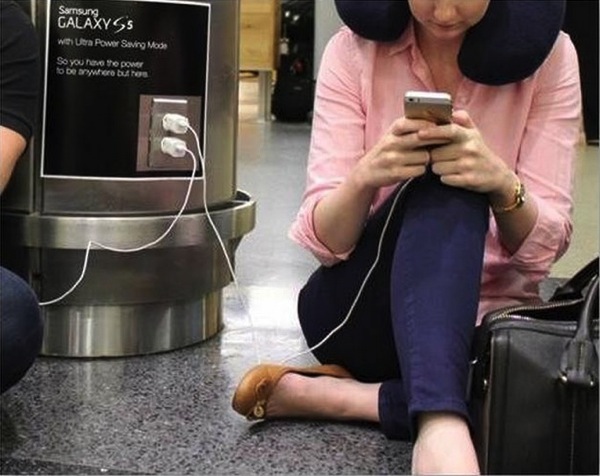 Well played, Samsung. Now cue the tweets showing Samsung users charging their devices at one of these outlets, which would make their marketing campaign turn kind of ugly.