Samsung has allegedly approached BlackBerry with a $7.5 billion offer, according to a person familiar with the matter, reports Reuters. The South Korean company seems to be interested in acquiring BlackBerry’s patent portfolio.

After making waves two and a half years ago, it’s back again. Back then, Jefferies analyst Peter Misek said that Samsung was either interested in licensing BB10 or buying RIM. However, a lot has changed since then: for example, BlackBerry’s Jack Chen has managed to successfully orchestrate the first half of a two-year turnaround plan.

Samsung has allegedly made a very generous offer, proposing a price range of $13.35 to $15.49 per share, which is at least 38% higher than BlackBerry’s current trading price, Reuters’ source revealed.

That could mean a final purchase price of $6 billion or $7.5 billion for BlackBerry, assuming the conversion of $1.25 billion worth of convertible debt. The news pushed BlackBerry’s stock price up. 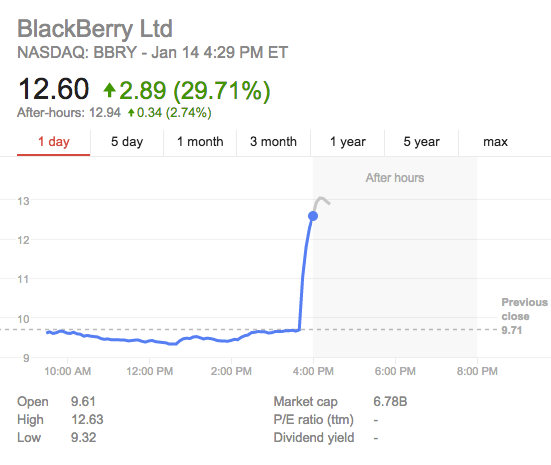 Update: BlackBerry has commented on the matter in a press release: