Soon after Facebook’s parent company Meta announced its Q3 earnings, its shares plunged as much as 23%. The company’s shares were trading under $100 at market open, the lowest price since 2016 (via CNBC). 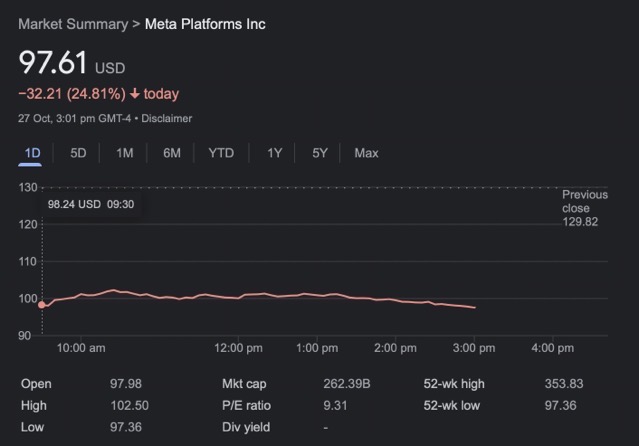 Meta reported quarterly revenue of $27.7 billion Wednesday, a decline of more than 4% year over year and its second straight quarterly decline. Its profit plummeted 52% to $4.4 billion.

The company further warned the fourth quarter would be more of the same, issuing a weaker-than-expected outlook. Meta is It’s expecting revenue for Q4 to be $30 billion to $32.5 billion, whereas the analysts were expecting sales of $32.2 billion.

Citing higher spending, Morgan Stanley analyst Brian Nowak downgraded the stock and slashed his price target to $105 from $205. He noted that Meta’s issues will persist as it continues to increase spending to build out its AI capabilities.

Cowen’s John Blackledge also downgraded Meta to market perform from outperform, and lowered his price target to $135 from $205 prior, citing the higher trajectory of operating and capital expenses. KeyBanc’s Justin Patterson lowered his rating on the stock to sector weight from overweight, also citing the rising costs.

Meta shares are down by more than 61% since the start of this year.