The main page of Apple.ca features “A Portrait of Canada”, the latest ‘Shot on iPhone’ ad campaign. 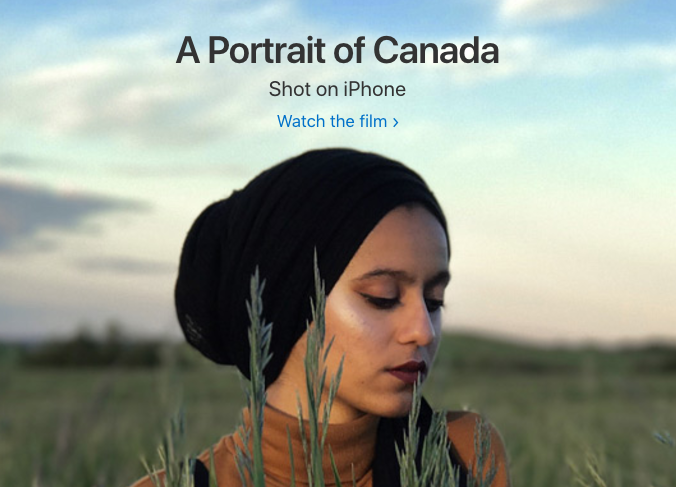 The video features images by Caitlin Cronenberg and other Canadians from across the country, while the video features Toronto hip-hop artist Humble the Poet and the song featured is “Suplex (feat. Northern Voice)” by A Tribe Called Red.

“Canada now represents an unparalleled freedom. We’re not simply tolerant, we celebrate and live diversity on our own terms,” says Humble. “We are each unique, and it’s that individuality that is our common thread, connecting us to something greater than ourselves. I’m inspired by the moment we’re in as a country, and as a people. My words are my contribution.”

Cronenberg said “My vision as a professional photographer, and as a Canadian, was to personally seek out and explore the stories of this vast country through the unique lens of iPhone. We saw the people, we met the people, we shot the people and places.”

Check out the 40-second video below:

“We feel it’s so important to be present and involved in this mainstream conversation around inclusivity,” says Ian Campeau, a member of the group A Tribe Called Red. “Our roots, our differences and our history are important as we establish a new day for the relationship between Indigenous Nations and Canada.”

Leading up to Canada’s upcoming 150th birthday, Apple has highlighted various Canadian developers in the App Store, with its most recent section titled ‘Unapologetically Canadian”, which lists the top 150 downloads of all-time.