It has been two days since Apple announced the new iPhone 5s and iPhone 5c and as expected, reactions are mixed (doesn’t this sound familiar?). 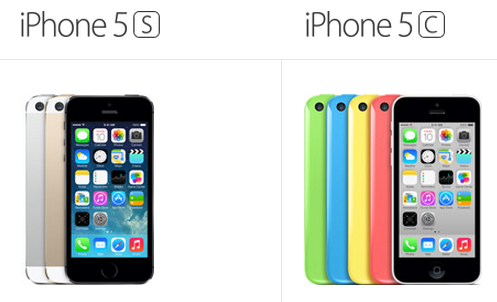 The iPhone 5c, despite originally being rumoured to debut as a ‘cheaper’ or ‘lower cost’ iPhone is nothing but cheap. It’s the essentially the next iteration of the iPhone 5 and is being marketed ahead of the iPhone 5s right now, as seen in our previous coverage of how every single Canadian and American carrier website shows these colourful models first and foremost.

Hands-on testers such as AppleInsider’s Daniel Eran Dilger describes the build of the iPhone 5c as beyond just a plastic feel:

Rather than feeling “plasticky,” the new iPhone 5c has a rubberized feel and rigid body, without the cheap flex or warp of common devices made of plastic. The backing is also treated to give it a shiny gloss, which further enhances the brilliant colors it’s available in.

The iPhone 5s can be seen as the new ‘pro’ or premium iPhone, for users that demand the latest and greatest technology from Apple, such as the Touch ID fingerprint sensor, 64-bit A7 chip and the improved camera.

With $99 and $199 prices on two year terms, the iPhone 5s and iPhone 5c puts new users in the classic Apple proposition: which one should I buy?

Here’s our advice for iPhone owners:

If you sold your 16GB unlocked iPhone 5 for $575 (at $125 ‘depreciation’), you had the joy of using it for 34 cents per day (assuming 365 days). Consider that the cost of ‘leasing’ the latest and greatest iPhone, free of the headache normally related when dealing with the Big 3. Is 34 cents per day worth it to you? In a world where some people pay $5 for a latte every day–it might be.

Of course, selling an iPhone online in the open market can be a pain but if you include clear pictures of your phone, box and accessories, you’ll find reputable buyers. Just make sure you ignore the ridiculous ‘lowballers.’

Okay, so that was a bit of a rant. Let’s get onto the poll question: Are you going to buy the iPhone 5s or iPhone 5c? Vote below (if you can’t see the poll you’ll have to visit the site to vote):

At the end of the day it’s just a smartphone so some argue we shouldn’t buy these new iPhones at all.